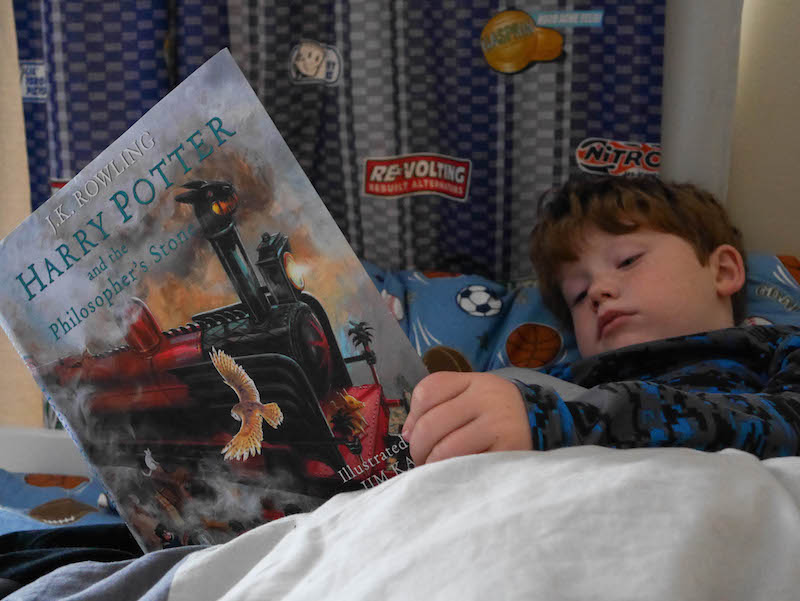 I’ll admit it. In 7 short years and with two close in age kids, I’ve made a lot of mistakes as a mom. Some we’re bad judgment calls, others actions that unintentionally hurt my kids. The thing is we all make mistakes all the time and our kids learn to adapt and roll with them. Sometimes they’ll point out what you’ve done wrong but I find that the things that hurt my kids the most tend to be the ones they don’t talk about. Someone else made me realize what the biggest mistake I’ve made as a mom so far was and now that I’m working to fix my error I also wanted to share it with you.

I love to read. Reading is one of my five favourite things in this world and number one if you take people and pets out of the equation.  I’ve been known to find a great book or series of books and suddenly develop massive “migraines” that left me unable to function until I had read said book or series cover to cover (hello Hunger Games trilogy). Luckily, I married a reader who thinks this is more endearing than annoying.

Will, who is now 7, is also an avid reader. As a small child, he would beg to read all day long. I remember some winter days in his first years where we literally read the entire Sandra Boynton collection at least twice. I can still recite the words and perform the dance moves of the Barnyard Dance.

As Will moved into chapter books, I watched him head to bed and read alone. He would sometimes come into Charlie’s room for story time and then he would return to read his own books in bed.

Recently I was sitting at a conference listening to the authors of a new book called Raising A Rock-Star Reader speak. As they began, I was actually feeling really good about myself. I didn’t need tips or advice as I had a 7 year old who had already read the first installment of Harry Potter and a 5 year who was well on her way to reading stardom.

I listened to some of their 75 tips on raising a reader and applauded myself that I had in fact by no actual design implemented most of these strategies in our home. But then, and this is a big but then, they gave this tidbit of advice:

My heart sunk. Was Will feeling this way? Had I simply misread his eagerness to read alone as a sign that my job was done?

I knew for the moment that my time as a functioning adult at the conference was done. I had to find Will. I got up from my seat and went looking for him in the day camp. I found him playing in the sand, laughing and running around with other kids. I ask to borrow him and we found a quiet spot overlooking the ocean. Will was giving me a look like I was about to tell him our dog died.

I started the conversation lightly and then said “Hey can I ask you a question?”. He nodded. I simply asked him if he wished I still read aloud to him or he prefers reading by himself. He looked me straight in the face and said “I wish you still read to me but you only read to Charlie now” and his eyes filled with tears. All I could think was how the hell did I miss this?

I asked him why he didn’t tell me and he answered with this: “I asked you to read to me after you read to Charlie but you always said it was bedtime and you were tired, so I stopped asking”. Now we were both crying. I apologized to my son and knew I had to fix this now before he became one of the kids who didn’t want to be read to anymore. And so I made a promise to Will on that beach that I would read to him for as long as he wanted. I asked about what books we should read and he said he would like to start by re-reading Harry Potter.

Now that we’ve returned home, I have stuck to my promise. We have altered bed time by moving it forward an extra 20 minutes. Now Will and I or my husband read books to Charlie (she’s currently obsessed with the Mr. Men series) and then Will and I get into bed, cuddle up and read the beautifully illustrated Harry Potter and the Philosopher’s Stone.

If you’ve made the same assumptions I have or have never read aloud to your child for whatever reason, the great news is that there is still time. In fact, Scholastic found that the number of kids wanting to be read aloud to stayed pretty consistent past 9 and in some cases all the way to the age of 17.

Over the last month I have reconnected in a very special way with Will over all things Harry Potter. We talk about the rules of Quidditch, my absolute obsession with owls and Will’s distinct dislike of Snape (I can’t tell him yet right?). We make recipes and pretend they are potions and draw deathly hollow symbols on his chalkboard wall. The amazing part is Will already read this book alone once and I am now lucky enough to realize I am the one who missed all this.

To pay it forward, I would like to send one of you an illustrated copy of Harry Potter and the Philosopher’s Stone to share with someone you love. Just click here and leave a comment on the photo. I will personally send it to the winner, wherever you are. 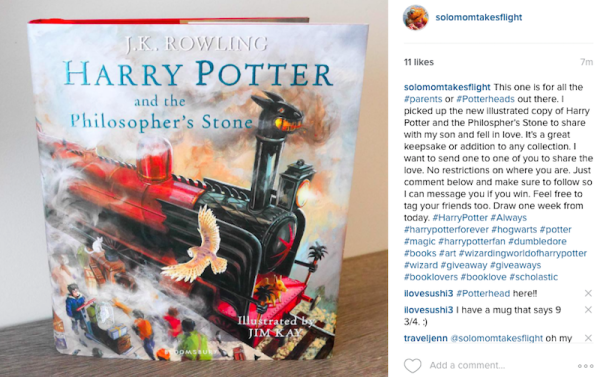 *These stats and more are all from the Kids and Family Reading Report from Scholastic.