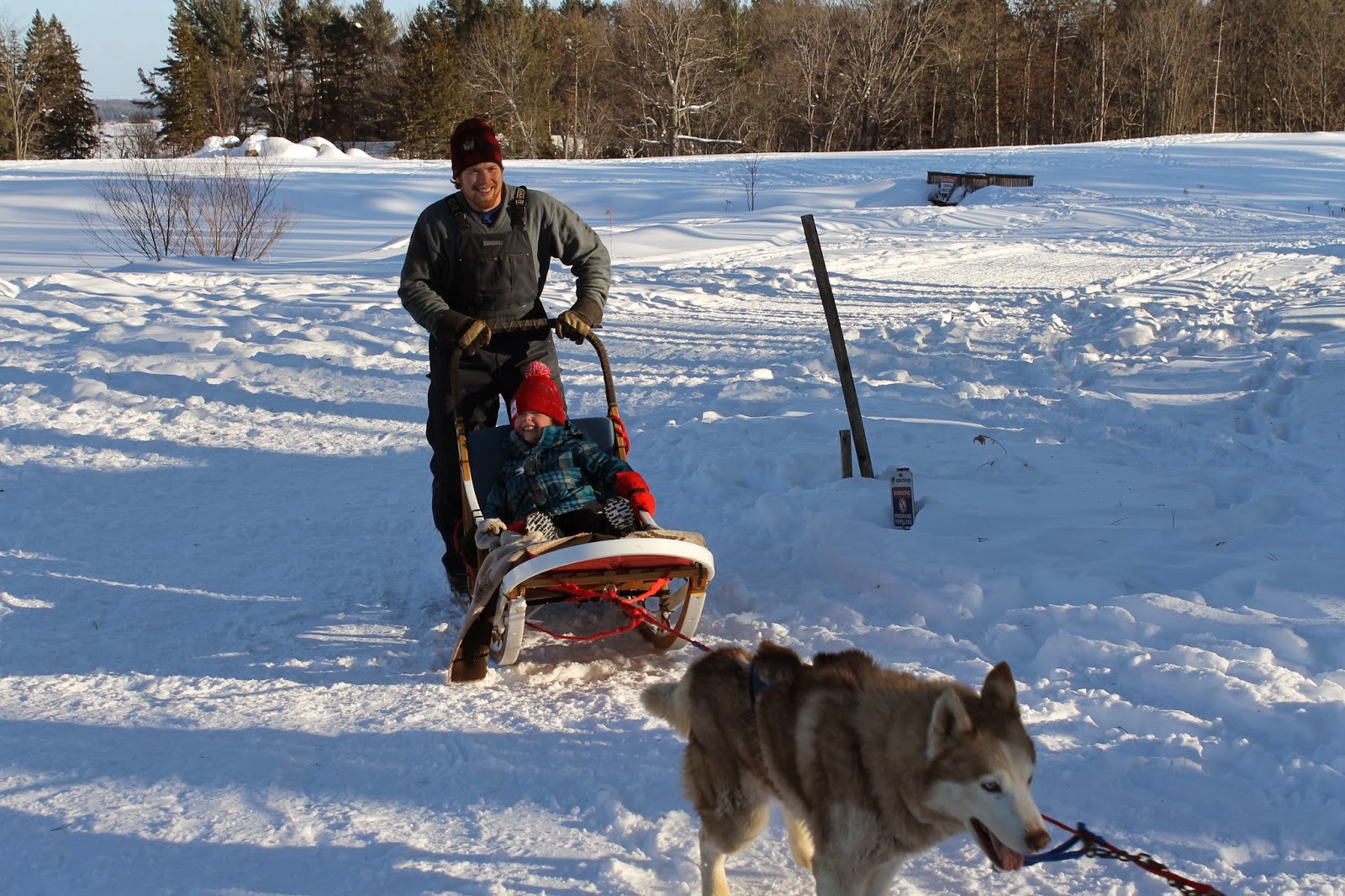 The highlight of our first day at The Rosseau, a JW Marriott Resort & Spa was being introduced to the team of Siberian Huskies from Winterdance Dogsled Tours.

The Winterdance dogs are not permanent residents at the hotel but instead live close by at their kennel in Haliburton, Ontario. The entire team consists of 150 dogs who live together from birth until death. We were fortunate enough to have met some of the dogs who were partnered with their own offspring and it was neat to see the relationships the dogs have with each other.
While we were unable to book a full tour due to limited space and an incredible amount of interest, our guide Ryan offered to give me a full demo and answered my many questions about the tour. Children are invited and can be sat on the sled. Children under 12 cannot drive the sled and for children 12-16, the guide is given discretion to allow them to if he feels it is safe. Luckily, Will got to take a quick ride in one of the sleds and he loved every minute of it.
In the demo, I was taught how to stand and how to brake and was reassured the dogs do most of the steering. The sleds are build so they lean easily and everyone who I spoke to that took the full tour loved the experience. The dogs run about 10km per hour but speeds sometimes increase to 20km per hour. The tour at the Rosseau is a short half hour tour but the company leads many other half day and full day tours and even an incredible helicopter tour deep into the wilderness where the tour is limited to just you, the guide, the dogs and nature.
The most incredible part of our encounter was seeing how much Ryan loved the dogs. This clearly was not just a job for him. Both the guides very clear that the dogs health, safety and happiness took priority over everything else. Every time the dogs stopped running, they were immediately given water and treats. Ryan took the time to go down the line and check on every one of them (approximately 30 dogs) and make sure they were happy and comfortable. He knew their personalities, where they were positioned on each sled and why and how each dog was related to the others. He explained which ones were older, more excitable or just plain cuddly.
On the tour, guests are encouraged to interact with the dogs who are the friendliest group of canines you will ever meet. This tour can easily be done with children and the dogs know exactly how to behave with even the youngest kids. We spent at least 30 minutes interacting with the dogs and not one snapped, growled or did anything but attempt to lick us to death as we hugged them.
What impressed me most about this company and the guides, was that they knew when the dogs were tired and called it a day. Many guests were begging for a tour and offering serious cash and the guides very politely declined in fairness to the dogs being ready to head home. If you are staying at the Rosseau and want to do a full tour, it is in your best interest to book as soon as you can. This is by far the most popular tour at the resort and I met more than 10 families who were disappointed that they were not able to book in to the tour.
When it was time for the dogs to pack up, we got to say our goodbyes and watch them get loaded into the truck for their journey home. The guides unhooked each dog and carried them individually to the truck. I asked if this practise was done so the dogs didn’t run away and the guide told me it is actually done whenever the dogs are separated from the pack to protect them from wildlife and the practise is done whether they are deep in the woods or literally in a hotel parking lot.  I looked into the eyes of the smiling extremely large husky being carried away and knew these dogs were living a pretty good life.

The half-hour tour at the Rosseau cost 75$ per adult and 50$ per child. A two hour tour, through the company, is $130 per adult on weekends and $110 per adult on weekdays. Children riding on the sled are half price. The company offers kennel tours in the summer when the dogs are not working which includes meeting all the race team dogs, playing with puppies, and meeting the owners. The tours are $40 per adult and $20 per child and include a BBQ. The tours are only offered in Spring, Summer and Fall, as the dogs are given first priority and allowed to rest in the winter when not pulling sleds. No admission to the kennel is granted to the public during winter months. As soon as the snow melts, this solo mom will be driving back to Haliburton with Will and Charlie as none of us can resist the opportunity to play with these puppies.

If you are in the area, a Winterdance Dogsled tour is an adventure not to be missed. Tell the dogs I sent you and give them an extra treat from me.