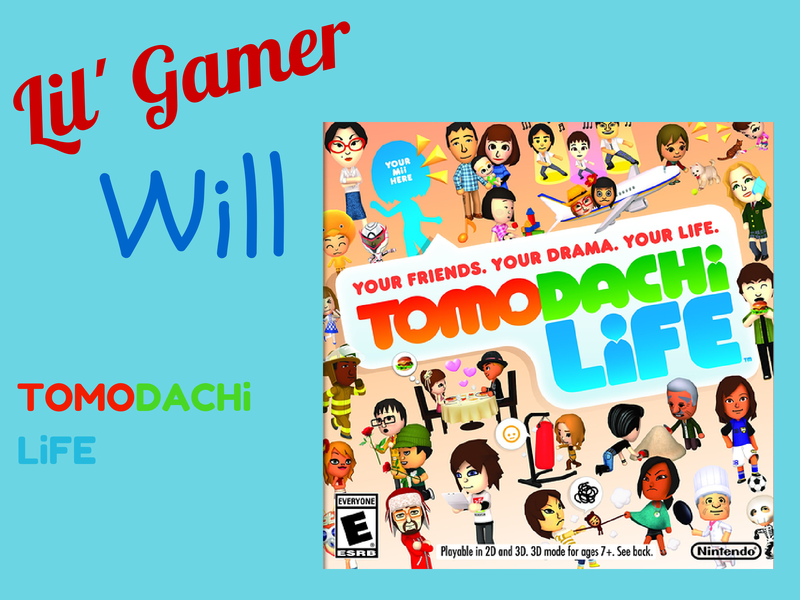 Before we left on our road trip, our friends at Nintendo sent my 6 year old Will a new game, Tomodachi Life,  to test out on his Nintendo 3DS. As I packed my Lil’ Gamer into the car, we opened the wrapper and headed out for a summer of adventure. We are home now and Will has taken some time to share his impressions of Tomodachi Life.

Here are a few things you should know before buying the game for your kids.

Rating: Tomodachi Life is rated E is for Everyone. Will, in his review, says that children 4 and up will enjoy this game. I would stretch that a little and say that your child should be 6 and know how to read. Charlie, our 4 year old, plays the game but clearly doesn’t have the understanding of it that Will does.

Tomodachi vs Tamagotchi: If you, like me, carried around an egg shaped key chain with bad graphics that died because you overfed it or ignored it, do not get confused. Tomodachi Life has nothing to do with Tamagotchi. In fact, when I opened the packaging I was a little sad to know that my kids wouldn’t know the reality of electronic pets dying on them just yet.

Time it Took Will to Get Into the Game: Some games capture Will from the start and he plays them until he beats them (hello Pikmin 3). This was not one of those games. It took Will a really long time to want to play it and the first few times he would stop almost immediately. It wasn’t until later in the trip that he started creating more Miis and having fun with the game.

What is it: Essentially the game is its own little social universe. The Miis your kids create are given personalities and life problems. They will require your kids’ help. Your kids Miis will meet other Miis and the game will progress as life does. Very disturbingly Will’s Mii married Charlie’s Mii and they had a baby named Leon. Your kids will need to make sure their Miis have food and clothes and don’t get sick and die. For doing so, they will be handsomely rewarded with fake money and other things. Will loves the fact that his Miis perform in rap shows. I love the fact that the music is tailored to everyone and I don’t have to worry about Miley Cyrus showing up with a foam finger.

You Will Be In the Game: Eventually, your child, will make you stand still for a photograph and import you into this game. Its a little weird but harmless.

Disclaimer: We were provided with a copy of TomoDachi Life at no cost. My opinions and well as Will’s opinions remain our own.