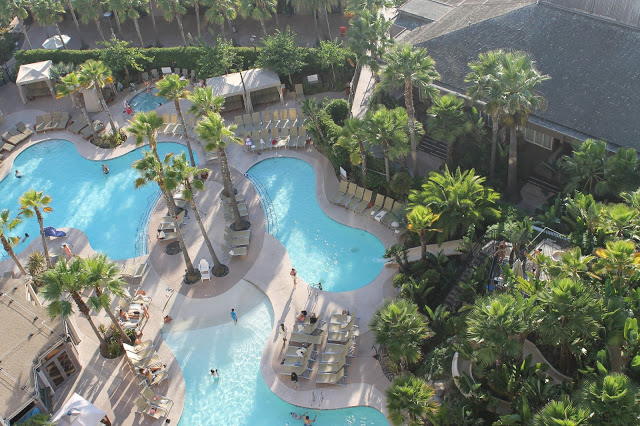 After what felt like the shortest and at times longest weekend in Disneyland (review to come), we headed to San Diego, California this week for a little rest and relaxation as well as to see the sites. San Diego should have been a short drive from Disneyland but I forgot my driver’s license at home and instead it became a little bit of a mad scramble to get there. Luckily, the concierge at our Disneyland hotel was able to arrange for a mini-van with car seats to arrive within approximately 45 minutes. The company who pulled it together was called American Eagle transport although I wasn’t able to find a website or any contact information for them. If you come across them some other way, the vans are incredibly clean and the service was quick and reasonably priced. I was going to rent a car in San Diego but actually found it really easy and quite affordable to get around by taxi and decided in the end not to get a car at all.

Within a few hours of leaving Disneyland, we pulled into our hotel the Hyatt Regency Mission Bay Spa & Marina.

The hotel is located directly across from Sea World and caters to families as well as business travellers and conferences. The hotel sits on Mission Bay and has a beautiful marina with resident sea lions. One of our favourite activities was renting a small boat from the hotel sportcenter, that looked a lot like a paddle boat with a motor, to be able to float amongst the sea lions. At $45 an hour, it is an amazing thing to do to get your kids close to San Diego’s wildlife.

The hotel also has three pools which appear larger on the hotel website than they are but are quite fun. One is a walk-in pool which is easy with smaller children. There are also three water slides, a hot tub and a spa. We spent every afternoon by the pool and the kids never got bored.

A great tip for this hotel is to book a room on a Regency floor if possible. When I looked online this was one of the cheapest rates I could get and it included breakfast, snacks and a happy hour as well as dessert bar. Essentially, it grants you access to a room on the 17th floor that is packed with bottled water, fresh fruit, assorted drinks and buffets throughout the day. The breakfast spread is incredible and will save you quite a bit of money as well as time as there isn’t much dining around the hotel besides in-room or a large restaurant downstairs. We visited during the happy hour and the kids enjoyed the appetizers while I enjoyed the $4 wine. Every morning we were offered bottled water and snacks to take with us which helped enormously throughout the day.

The primary reason we chose to visit San Diego was to experience the San Diego Zoo. The zoo is world famous and frankly its incredible.

We arrived at the zoo before it opened and were treated to no lines and a really neat opening ceremony where the zoo keeper brought out an owl for a zoo keeper talk while a group of macaws was released to fly over the zoo and back to their area. After the opening, the zoo keeper asked the kids to help train a skittish bird that was learning to recycle and needed to get used to being around children. It was a very cool experience and the kids were thrilled to help out.

There are a few keys to having a great day at the San Diego Zoo. The first is simply not trying to do it all. The zoo is huge (approximately 100 acres) and there are animals everywhere. We were at the zoo on a particularly hot day and even the thought of rushing through it was unbearable. We instead chose the animals we wanted to see and plotted the best course on the map. Once the kids were beyond able to walk, we board the tour bus which covered a lot of the major animals we missed. The exhibits we loved were Panda Canyon, the Polar Trek, Koalafornia which is brand new and the Lost Forest which houses amazing apes and monkeys.

One great way to escape the crowds and give the kids a rest is to have lunch at Albert’s restaurant which is located in the Lost Forest. The restaurant has sit down table service, wonderful staff, is air conditioned and quiet. We sat for approximately an hour and after lunch the kids were refreshed and ready to go and we were able to spend more hours at the zoo than I had originally expected.

A final note on the zoo is that the children’s zoo isn’t fantastic and it is worth skipping if you only have one day at the zoo. It has a small playground and petting zoo with goats but your time will be better spent checking out the exhibits. Make sure to make use of the tour bus, express bus that lets you get on and off at different stops around the zoo and the skyfari aerial tram. I had originally planned to spend two days at the zoo but we were having so much fun exploring San Diego we decided to forgo the second day. If you have more than a few days here, I would recommend breaking up the days so that you don’t need to visit the zoo two days in a row as it is quite exhausting and overwhelming for smaller children.

While in San Diego, I wanted to spend some time doing something with Will and decided that we should both try surfing. The hotel recommended the San Diego Surf School in Pacific Beach and we were able to book a private session the night before we wanted to surf.

We arrived at the school to sign some waivers and pay ($130 US for both of us) and we were sent off to the beach to meet our instructor Travis. My first impression of Travis was that he sounded just like one of the turtles out of Finding Nemo and I knew immediately this would be fun. Travis helped us get suited up, gave us brief instructions that Will was able to understand and then led us to the water. Will got to surf first and immediately was up on his board. He loved hanging out with Travis and had a wonderful time learning to surf. Travis was easily able to juggle helping Will and teaching me by bringing him right on to shore when it wasn’t his turn. We had booked an hour lesson and stayed in the water for much more than that. By the end of the lesson, I proudly caught a decent wave and was able to get up and surf the wave. I highly recommend checking this school out if in San Diego as it was definitely a wonderful and memorable part of our trip and a great bonding experience for me and Will.

Although we had packed a lot of adventure into a few days in San Diego, we also were able to visit La Jolla which is known as the Jewel of San Diego and a great place to visit with kids. We took a taxi to the area known as the Children’s Pool which is a beach as well as a great place to visit some seals. The kids loved watching the wild seals and walking in the sand near where they were hanging out in the water. After that we headed along the coast to the area known as La Jolla Cove which has interesting tide pools and a lot of sea lions. The kids loved splashing in the water and swimming near the sea lions and had fun walking along with the tide pools. They also had a great time watching some of the amateur kayakers. There were many near the shore, and I think kayak tour packages like www.everydaycalifornia.com/products/kayaking-tours have attracted a lot of people to these water adventures.

After we all got soaking wet, we were hungry and headed to the main area of La Jolla which has high-end shopping, hotels and a variety of restaurants. We ate at a little Italian place called La Dolce Vita and frankly I won’t say much about it but I would skip it if I were you.

All in all, we have loved every minute of San Diego and are very sad to be leaving so soon. One might be able to enjoy many more things when visiting this place. For instance, if you love tattoos and piercings, you may be able to find good salons and even get a Body Piercing in San Diego. Similarly, if you love boats and cruises, you can enjoy a lovely dinner cruise in San Diego as well. I would love to return and explore the rest of the city with the kids but am very thankful for the things we did get to see and do. If you are considering a trip to San Diego with kids, check out the deals being offered across the city which include free admission to museums and hotel deals during the San Diego Kidvasion promotion.

The adventure continues tomorrow as we head to Legoland California. Check back for a review of their new hotel as well as some Disneyland posts!