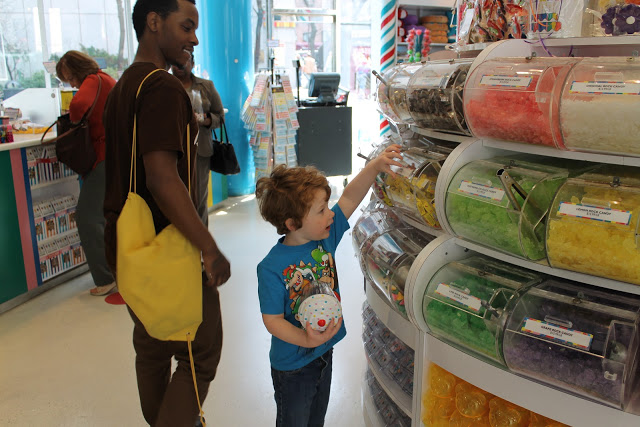 Last week I found NYC Kids Tours and  booked a tour for me and Will. The tour from NYC Kids Tours began at 10:00 am at Bryant Park. Unfortunately, our tour guide arrived 20 minutes later. I did get a text from him explaining he would be late and Will and I explored Bryant Park on our own.

In Bryant Park, there is an adorable carousel and a section with kids tables and a small selection of children’s books. The park is big enough for kids to really run around in and on your own it would still be quite manageable with more than one child. I suspect, due to the number of sandwich shops that are in the park, it might be best to avoid the park during lunch hour on weekdays.

Once the tour guide (David) arrived, he introduced himself to Will and the two made quick friends. He gave Will a workbook created by the tour company as well as a disposable camera for him to take photos of the tour. The book was geared to kids a little older than Will (the website actually recommends the tour for kids older than 6) but the camera was a hit. Will immediately began to take pictures and was excited to begin. 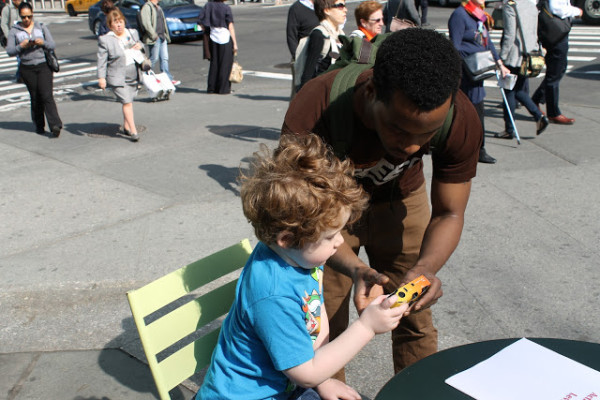 David suggested we start the tour with a walk through Times Square. He pointed out the crystal New Year’s Eve Ball which is apparently there all year as well as some other interesting facts about Times Square. The one thing that I really appreciated while we were in Times Square is how protective he was of Will. He kept the “children’s characters”, who try to entice your children into taking pictures for money, at bay and was quite careful with traffic etc. He asked me quietly if I would like to take Will to certain stores which I also appreciated instead of just yelling “lets hit the toy store”. After a quick tour of Toys R Us, we headed to the car portion of the tour.

The car that arrived to pick us up was a nice Lincoln town car with a very nice and polite driver. It was also very clean. We hopped in the car and headed to Central Park. David was able to interest Will in some of the history of the statues and Columbus Circle and his Central Park scavenger hunt was a hit. It was nice to return to the park and learn a little about what we were seeing yesterday without it being an overwhelming adult focused tour. We climbed to the top of a big rock to see the city which Will loved and had some fun just playing in the park. One unfortunate part was that David made a big deal of getting to the top of the rock so we could write our names on it in chalk but when we arrived at the top he realised he had forgotten the chalk. Will got over it quite quickly due to David’s idea to have a race down the trail that led off the rock.

Once we were done our scavenger hunt, we walked over to FAO Schwarz. Since I knew this was a stop on the tour, I had avoided it the day before so Will didn’t see it. David set up a challenge for Will to find the tallest thing in the store and as we entered the store gave him a measuring tape. As soon as we walked in the two of them were off measuring giraffes and Lego men all over the store.

Once we had measured quite a few tall things, David led Will over to the giant piano. Will had a blast running up and down the keys and playing with some other kids. 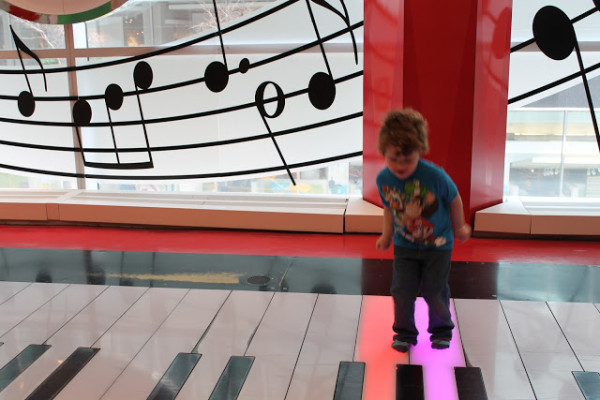 Our next stop was a quick car ride over to Dylan’s Candy Bar. Will had a lot of fun with David running around the candy store but if I am being honest, this stop is completely unnecessary. The candy selection in FAO Schwarz is better laid out and about the same size as Dylan’s Candy Bar with a more interactive and kid friendly staff but Will liked it.

Now the real question: Is this tour worth it? In my opinion, no. The NYC Kids Tours costs $349. It was fun but it wasn’t much different than the things you would do in NYC anyways with children. Besides the Central Park scavenger hunt there wasn’t a lot to do except shop. It was helpful to have a car but because the car service essentially took you from Times Square to Central Park (under $10 in a cab) and then from Central Park to Dylan’s Candy Bar (again a minimum cost), it doesn’t justify the cost of the tour. We were lucky enough to be dropped off at our next destination but I think that had to do with the amount of extra time we had from not taking a tour of Bryant Park.

NYC Kids Tours also offers a much cheaper tour of Greenwich village which costs $59 per child and $49 per adult that doesn’t involve a car and is probably a better value. Also I think it would be a better tour due to the fact that there would be other children there. I think it would have been more fun with a few other kids instead of just us. All in all, we had a wonderful time with David and Will thought the tour was excellent. Personally, I would choose a tour next time less based on commercial locations and more based on New York city landmarks and parks.

After NYC Kids Tours, we were off to the Gazillion Bubble Show. The show is created by bubble artist Fan Yang and every show is performed by one member of his immediate family. Today’s show featured Melody Yang. Melody is an energetic and beautiful 21-year old so Will was smitten from the start. The show begins with a short video about the family as well as the products offered by Gazillion bubbles (which in my learned opinion make the best bubbles on the market). Once the video was done, there wasn’t a mention of the company again. There are bubbles for sale and interesting bubble blowing merchandise but the sales staff are not pushy and the display is not overwhelmingly attractive to kids which was nice.

The show is a little over an hour long and it is mind-blowing. Will loved every minute of the show and so did I. It was fascinating to watch what Melody could do with bubbles and the show was incredibly entertaining for kids and adults. There are certain points in the show where the theatre is filled with bubbles that even the grumpiest of people would smile through.

We purchased “premium seats” which meant we were in the first row. The additional cost for these seats is minimal and if you can get them, I highly recommend it. Will was able to reach up and pop bubbles that were full of fog and watch the fog evaporate before him. Be warned- you will at some point the show be covered in bubble solution no matter where you sit.

The Gazillion bubble show truly was an incredible thing to do with a kid and you could easily go with more than one child on your own. The bubbles are almost hypnotizing and there were no children running around the theatre or crying during the show.

With premium tickets you also receive 10% off any merchandise and 50% off a photo of you in a bubble. Will was hesitant to be put in a bubble before the show but after the show begged to take a photo.