We woke up to a beautiful morning in New York City and by 9:00 am, we were out the door and on our way to the Museum of Natural History. The only issue…it opens at 10:00 am. When we arrived at the steps we had at least 40 minutes to wait and Central Park was beckoning from across the street.

Will decided that he just wanted to play outside. His main argument was that we have dinosaurs in Toronto but it “is never warm and sunny” and so with that we ran across the street to explore the park.

This is where I learned an important lesson. It think with Will, because he is more of an actual kid than Charlie, I sometimes forget how hard a lot of walking must be on him. I walk with the kids a fair amount when we are in Toronto but today we got lost in the excitement of New York and may have hit the pavement a little too hard. After spending an hour climbing up and down rocks, looking for turtles and checking out squirrels and birds, we were both a little tired and it was only 11:00 am. 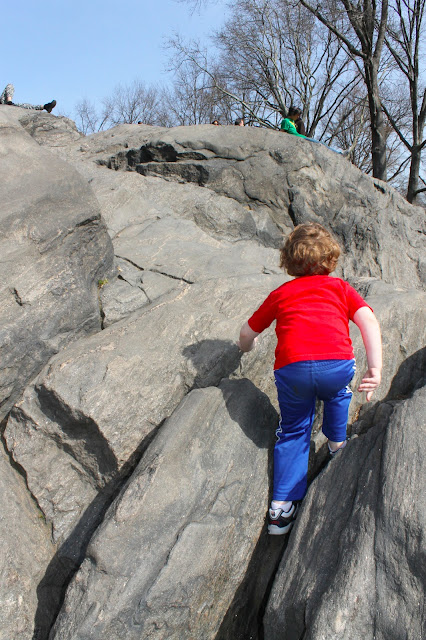 Now we had a problem. I struggled with whether we should just keep walking or exit the park and find a taxi to take us to the east side of the park to hit the zoo. In the end, we made the decision to take a bike taxi through the park. This was pretty exciting for Will and an interesting way to see the park but within 10 minutes of getting on the bike, we drove by a park that was far too enticing to miss out on. The bike taxi man was not pleased to hear we were ending our trip and in the end charged me $25 for the ride. If you read the following post on Tripadvisor, people have very mixed reviews on this service and the cost but it was an exciting thing for Will to do and it gave our legs a rest.

The playground we found was Heckscher Playground which is the oldest and largest playground in all of Central Park. Will had a great time in the castle structures and the slides are a great height for kids older than 3. There is also a toddler section of the park which was packed with preschoolers this morning. The only thing I would caution against is that during the week, or at least today, a school was using the playground for gym class and Will was not allowed to join in on the fun which to him was a little confusing. We ended up heading to the Central Park Zoo at this point. 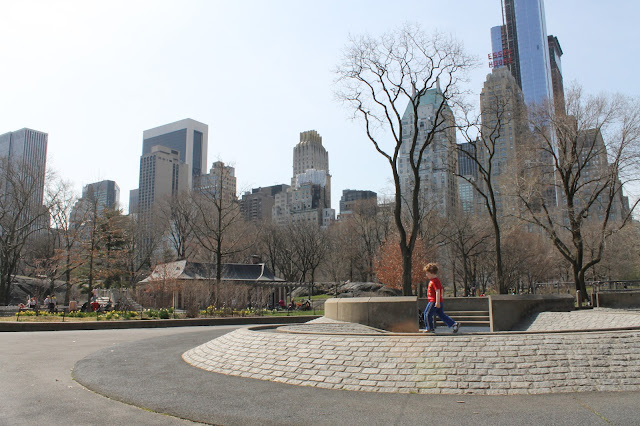 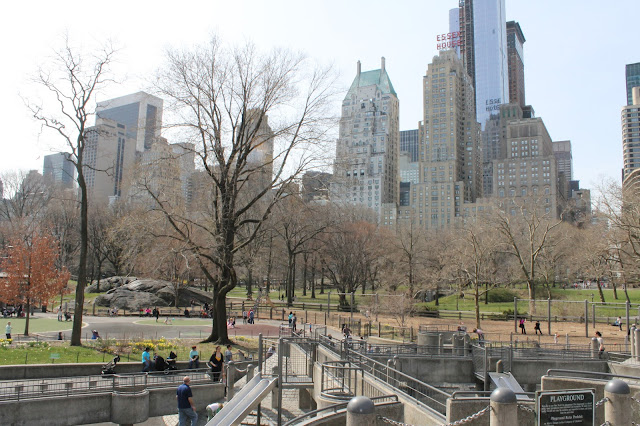 The Central Park Zoo is a quick jaunt from the playground but we arrived a little more exhausted than I had hoped. Will at this point kept telling me his legs were tired and I knew we needed a plan. Luckily the zoo has a cafe and we were able to sit down for lunch. We ordered a cheese pizza for $8 which was enough pizza for the two of us and the service at the cafe was quite quick. Not the best food we have had on this trip but certainly not the worst zoo food I have tasted (I’m looking at you Toronto Zoo).

After lunch, it was finally time to hit the zoo. Being from a city with a fairly large zoo, Will and I found this zoo…well…a little depressing. The animals are in quite small enclosures and big animals like the polar bear and the snow leopard appear to be alone in their enclosures. We didn’t inquire as to weather the animals were alone but from appearances they did not look terribly happy.

The Central Park Zoo does have some really attractive features. The first is the Delacorte Music Clock which is a whimsical clock featuring animals playing musical instruments. The clock actually plays 44 different songs that change with the seasons. Today we heard it play Raindrops Keep Falling on My Head. Will loved the clock and many of the children were enchanted by it. 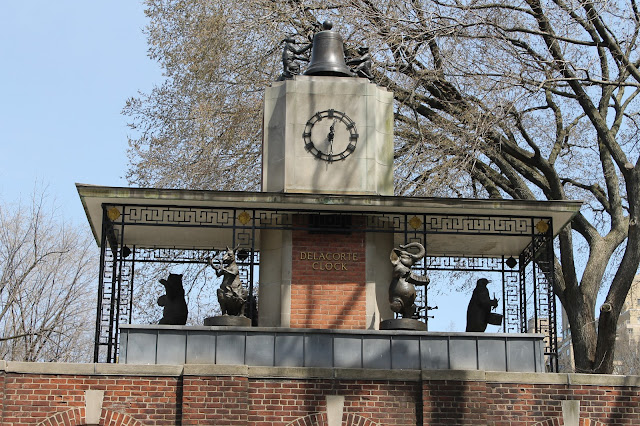 Another great feature of the Central Park Zoo is the Tisch Children’s Zoo which is a wonderful little petting zoo. It is important to note that since the children’s zoo is not in the main zoo but down a pathway, they require you to show your zoo tickets to enter. We were unaware of this and had a very difficult time getting in since I had misplaced our tickets. In the end, I was lucky to find the receipt from the ticket purchase and the gate attendant begrudgingly let us in. Once we entered the children’s zoo, Will and I fell in love with it. The animals are mostly goats, pigs and a cow but there are fun little play areas and an opportunity to feed and touch the animals. We stayed in the children’s zoo for almost twice of the amount of time we were in the main zoo and when we return to New York City I will probably just take the kids to this section and to see the clock. 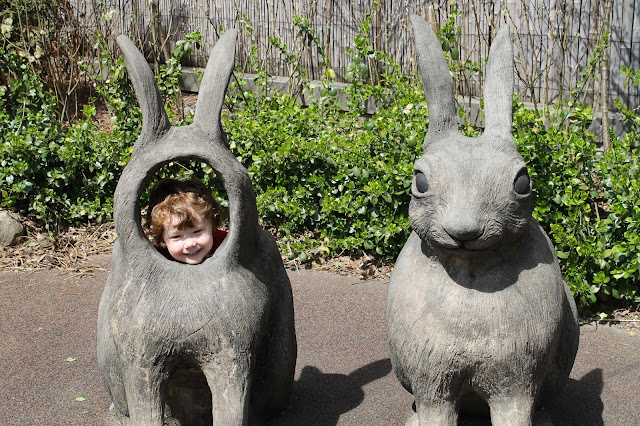 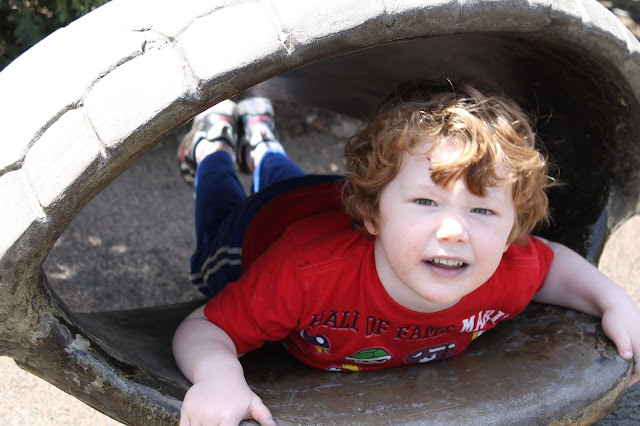 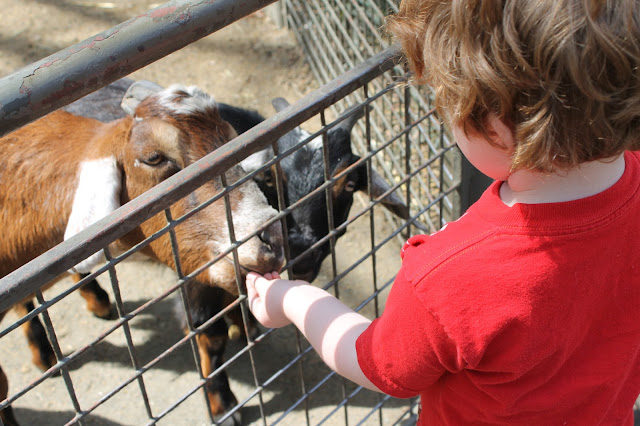 By mid-afternoon, we were both exhausted so we hopped in a taxi cab and returned to the hotel for rest time. We ventured out again later in the afternoon and headed to Times Square. Personally, I hate Times Square but I felt it wouldn’t be fair to take Will to New York without letting him see it. Luckily he and I share the same taste in travel sights. Very quickly Will asked if we could leave  so we ducked into a Dave and Busters for a quick dinner and some games. Dinner left a lot to be desired but in the end Will and I had a really good time running around playing the games. Will traded in our tickets for a mini basketball and we were on our way back to the hotel.

When I began to look for hotels, I almost booked one in Times Square thinking Will would love it. I think it depends on the age of your children but even in a one on one parent to kid situation walking in Times Square with a four year old was stressful. Will was getting bumped and actually fell once and in the end I wasn’t terribly comfortable being there with him. A few children’s characters tried to entice him to take a photograph with them but he wasn’t interested. He also was quite concerned that Spider-Man was asking for money.  The location of our hotel has proven to be quite ideal with kids as it is a quick walk to Central Park, Rockefeller Center, Bryant Park and Times Square without being caught in the madness of Times Square.

Will are I are very excited for tomorrow as we have a NYC Kids Tour planned as well as tickets to the Gazillion Bubble Show. 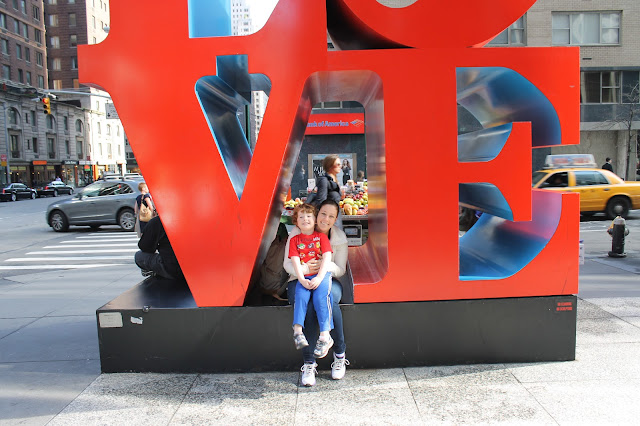