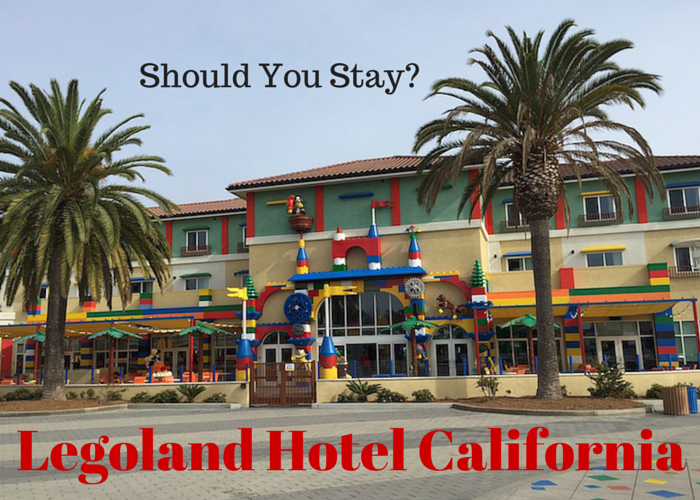 When we scoped out things to do in California, an exciting prospect was checking out the Legoland California Hotel. Having been a huge fan of Legoland, Orlando, I couldn’t wait to surprise the kids with a couple of nights over at one of their favourite parks. 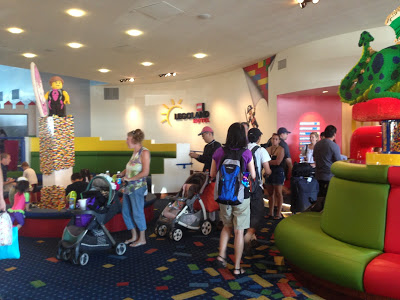 We arrived at the hotel very early on a Thursday morning and weren’t surprised to find the main lobby buzzing with people. Somewhat surprising is how long it actually takes to check in to the hotel. Although the hotel was always busy, there was only ever one or two people at the desk and lines for check-in and to speak to the concierge were quite long. Team that with the fact that everyone who is in those lines has excited kids running around and you have complete chaos. Tip: When you finally get to the front desk, check out the mural of mini-figures. It is quite incredible. 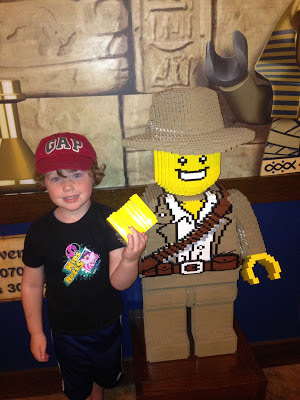 While we were waiting to check-in, I overheard the woman at the front desk explain to the people in front of me who were hoping for a premium suite, that in fact the suites are “a complete rip-off”. Seeing I was checking into one I wasn’t exactly thrilled.

Essentially, the premium suites differ from regular rooms only in the fact that the adult section of the room is also decorated with themed wall paper and lego statues. Ours had a few lego jugs and vases and some lego bugs. We booked the premium suite as it was the only room left we could get but in the end would stick with the regular cheaper room if we returned.

The premium rooms cost about an extra $100 a night so depending on the length of your stay, you may be paying a lot to look at Lego vases. The regular suites still have a separate kids sleeping area and honestly it would have been nice to get a break from all the decor in the hotel in the adult room.

When we checked-in we were not told at all about food vouchers that were available from the front desk. This was in fact a grave oversight that in the end really affected our view of the hotel. We also were not told that Charlie at 3 years old ate for free at the main buffet restaurant Bricks or that the breakfast buffet was included in our hotel cost. We only found all this information out on the last morning we were at the hotel when we witnessed people paying with vouchers. Upon my own further investigation, I learned that if you pre-pay for the buffet by buying a four pack at the front desk, the price per meal goes down from $19.95 for adults to $12.50 This is a significant difference and I feel the voucher system should have been explained at check-in.

After I spoke to the manager, one of our meals was refunded and I was sent on my way still not having been told that our breakfast was free and included in the price of the room. On our way into the restaurant about 20 minutes later, another manager who had walked in on my original conversation found me and told me he had looked into it further and that we shouldn’t have been paying for breakfast at all. He kindly refunded the breakfasts we had on our bill. I felt he really went above and beyond my expectations compared to the first manager who simply didn’t care and didn’t bother to look at the list in front of her to see if our breakfast was free. 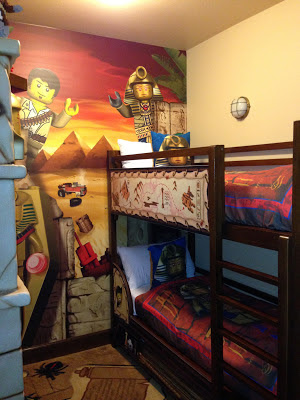 These problems aside we did have a wonderful time at the Legoland Hotel and the kids loved it. The rooms are very well detailed and quite fun. At check-in you are given a treasure hunt card to complete with your kids that will open a treasure chest in the room. Our chest had some chocolate pirate coins as well as two lego mini-figures and a magazine.

We booked into an adventure room as the pirate suites were all booked up. The room had great detail to it and some really fun features. I didn’t think the kids would love it as much as the pirate suite but they could not have been more thrilled with our room.

Besides the room, the hotel had some other great features. The elevators when you entered played typical elevator music but turned into a disco dance party between floors. This clearly shows the elevators have the necessary amount of traction on the ropes for the elevators to function in such an efficient manner! Next to the elevator on the main floor, there was a fun whoopee cushion in the floor that none of the kids in the hotel could get enough of. Finally, the bathrooms on the main floor were incredibly cute and Lego characters complemented you when you washed your hands.

The Legoland hotel promises nightly entertainment including a lego building contest which is a great thing to have once the park closes. You should be prepared for the fact that the entertainment isn’t exactly at a Disney level but is much more of a camp style activity where two people lead the kids in activities. I particularly enjoyed being able to sit down with a glass of wine and my feet up while the kids were entertained by other people for once. 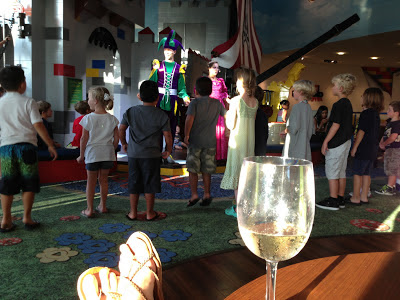 Part of the nightly entertainment is a Lego building contest which varies by month. Yes, you read that right. Basically, if you are staying three nights in a row, the contest is always the same. Our nightly contest was to build a birthday cake. It was easy to tell which kids had been there the night before as a lot of them still had their cakes and were simply altering them a little. The contest is judged by the two hosts and the winner gets a $5 gift certificate to use a Legoland. Our host was quite funny when interviewing the kids and each child was separately interviewed about their creation. This was definitely the funniest part of the entertainment that night.

When staying at the Legoland California Hotel, you are granted early admission to the park. This gives you an extra half hour in the park without other guests. In my opinion, the early admission is too short and doesn’t justify the high price of staying at the hotel. We went to the early admission and found we were shuffled from line to line before even getting into the park. Once in the park the extra time you had was really only about 20 minutes and only 4 rides were open which didn’t include what most people would categorize as the “big rides” or main draws to the park.

Here is a list of tips I came up with while at the hotel:

Should you stay at the Legoland California Hotel?

All in all, it is definitely worth it to spend a night at this fun and kid-centric hotel. We enjoyed our entire stay and don’t regret spending the money to check it out. If there was anything I could change about the hotel, I would hire more front-end staff, better entertainment and put in a better pool. Otherwise, its a great place to stay and let your kids be kids for a night. Other than that, I would highly recommend checking into one of the many hotels located within 10 minutes of Legoland particularly the Cape Rey or Hilton Garden Inn. Hint: They are both nicer, cheaper, have better food and are on the beach.

If you do end up checking out the hotel, drop me a line here and let me know what you thought!