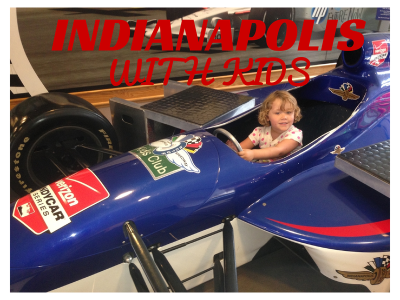 Indianapolis was one of the cities I was most looking forward to on the way home because I had good friends in the city who had invited the kids and I for a home cooked meal. After 30 some days on the road, we were welcomed with open arms, fed wonderful food and given some much needed hugs. Charlie had so much fun that she wanted to go back the next day but we had other plans- exploring Indianapolis with kids! Having never been to Indianapolis I assumed there would be a lot of race cars and a few misguided Purdue fans. Instead, we found a gorgeous city with lots to do. Here are my favourite places to sleep, eat, play and learn in Indianapolis with kids. 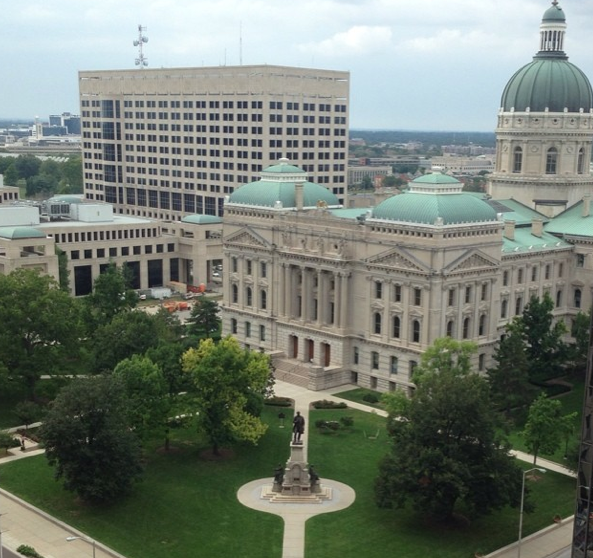 We were invited to stay at the  Hyatt Regency Indianapolis in the heart of downtown Indy. I stay at a lot of Hyatts and was excited to check this one out. I fell in love when I looked out the window. We had a great view of the amazing downtown core and the kids spent time staring out the window deciding where to go and what to do.

The rooms were spectacularly clean and quite large. We also loved the Regency Club of this Hyatt. You can gain access to these clubs by booking a room on the appropriate floors, staying at a lot of Hyatts or paying a fee. I actually recommend if you are traveling with young kids to pay the fee. At most of the Hyatts, the fee is around $50 but for kids this set up is perfect. Each morning, they set out fresh juices, fruit and breakfast foods and at night you can easily make your kids dinner from the selection of cheeses, breads and appetizers available. All this while enjoying a cold glass of vino after a long day of exploring.

Besides sleeping, chilling in the Regency Club and a nightly swim in the indoor pool, we spent very little time in the hotel. While we were onsite, the service we got was exceptional. On checkout day, we had a slight emergency which I will get into later and the hotel immediately guided us to the local children’s hospital and told us not to worry about checking out on time.

The location, service and quality of the Hyatt Regency cannot be beat in Indianapolis.

It was the summer of food and by the time we reached Indianapolis, I decided we needed to get back to healthy eating. Eating everything in sight in Texas and Louisiana was fun while it lasted but this mom needed some veggies and a serious BBQ intervention. Although we were looking for healthier fare, everything we ate in Indianapolis from my friends house to these restaurants was absolutely delicious. 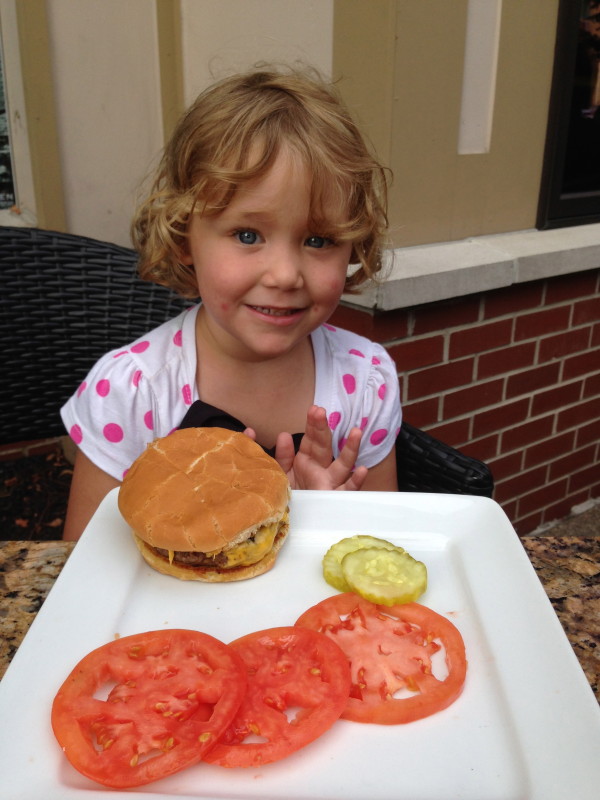 Located right in downtown Indianapolis, Café Patachou is fantastic. All the food is sourced locally from within 100 miles of Indianapolis and is delicious. The most amazing part was not that they were implementing these ideas now but they have been doing it for 25 years. Long before “Farm to Table” was a buzzword. The kids meals are served with fresh fruit and the selection of foods is huge. As a family who brunches, we probably could have spent a week visiting this restaurant and not run out of food to eat.

Okay, I pledged to eat healthy but when I heard about BRU Burger we had to go. Here’s the thing, Charlie and I love burgers and not just any burgers. We look for places making their own burgers and consider ourselves connoisseurs in the burger industry. At four, Charlie can immediately tell you if a burger is good or not. At Bru Burger, she was too busy eating her entire burger before saying a word.

One of the greatest accolades I can give this restaurant involved my last trip to Las Vegas. I waited in line to try the new raved about Gordon Ramsey Burgr at Planet Hollywood. After trying it, I could easily say it was one of the best burgers I have had. Bru Burger was better. My burger was cooked to such perfection it was ridiculous. The toppings were fresh and I loved being given such an extensive list to choose from. Kids are welcome and, if you sit on the patio, there is a fair amount of grass for them to run and play on once they have devoured their food.

When you are ready to burn off some calories there are a lot of places to play and learn in Indianapolis. 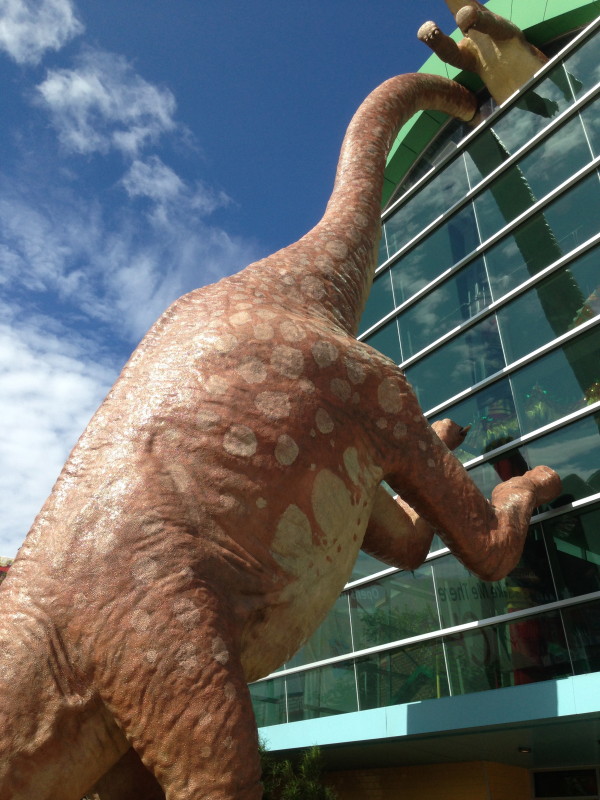 This summer, we visited a lot of Children’s Museums. This led me to almost skip the Children’s Museum Indianapolis. Luckily, we had scheduled dinner with our friends who are also parents and everyone told me this was a not to be missed experience. They were right. From the moment we pulled into the parking lot, I was as or more excited than the kids. The building itself is pure magic with large scale dinosaurs hilariously trying to break in. We entered to see a giant transformer giving instructions and the kids could barely contain their excitement.

To be clear, this is the best Children’s Museum I have found. There are a few reasons for that but mainly there is a huge emphasis on learning here. A lot of the museums we visited were fun but not necessarily different from each other. The Children’s Museum Indianapolis is very different.

Currently, the Terra Cotta Warriors are on exhibit at the museum. Knowing a little about the painted army that was unearthed from an Emporer’s tomb before we visited, I made sure that the kids and I headed straight to the exhibit. I thought the exhibit would be aimed at adults and assumed I wouldn’t have much time to explore it before the kids wanted to do other things. I was wrong. They loved the story of the warriors and I was blown away by how the exhibit attracted children. There were life size puzzles of the warriors for the kids to assemble as well as a terra cotta station where they could make their own warriors and learn how these beautiful statutes were recreated.

Once I was done exploring and they were done creating, we headed out to visit the rest of the museum. This museum isn’t just for young children and there were a lot of adults exploring on their own. Where this museum differs from others is in the topics it isn’t afraid to touch. There is an incredible section of the museum dedicated to the Power of Children featuring Anne Frank, Ryan White, and Ruby Bridges. As I child who grew up at the same time as Ryan White, who died of AIDS from a blood transfusion, it was strange to be able to sit in his bedroom and listen to his story. The kids sat down with me as we learned how Ryan had been kicked out of school and segregated due to fear. The kids sat silently for longer than I had seen in a while and at the end of the film, Will turned to me with tears in his eyes and simply said “that was sad”. We got up and kept exploring without talking about the film. Later that night Will brought up Ryan White again and I explained the story how I knew it. Will took it very to heart and declared he would never treat another kid that way. Mission accomplished Indianapolis Children’s Museum.

Make sure to stay for the end of the day parade where the staff and resident dinosaur mascot head from the top floor of the museum to the front entrance in a parade featuring your own kids. Charlie loved the parade and its was a really nice way to end the day. If you are headed to Indianapolis, don’t skip this museum.

As a mother and blogger, I have a very hard time profiling zoos and aquariums as I don’t always know where I stand on them. I’ve recently written this piece to explain a little further where I draw the line on visiting animals on display. By the time we reached Indianapolis, we hadn’t really visited a zoo all summer and I was intrigued by their International Orangutan Center. I love orangutans. I find them to be such a curious animal and one which needs to explore. I was blown away when I saw the new International Orangutan Center.

From the entrance of the zoo, you can see the top of the center and the kids and I bee-lined for it. There were a number of volunteers explaining how the building works and teaching us about the orangutans and their distinct personalities. The center is built so the orangutans can have access to the outside. This is a huge climbing structure that doesn’t have fences or barriers but allows the animals to go from tower to tower and into different sections of the center. The orangutans looked like they were having a lot of fun swinging high up in the sky. 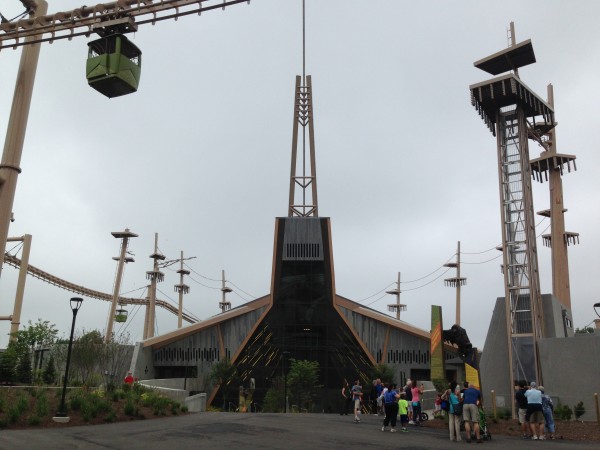 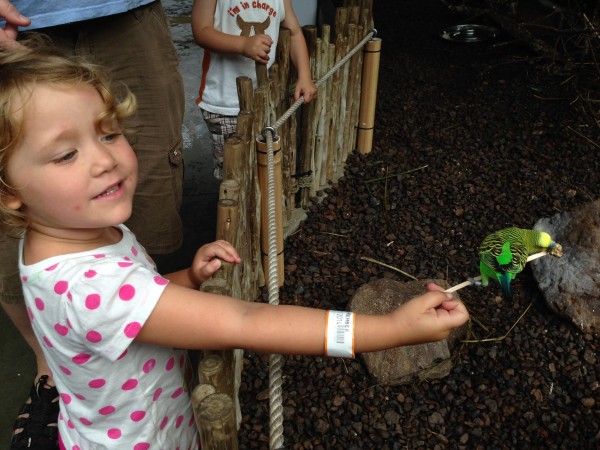 One thing I didn’t love is that the zoo was advertising a sky car that would open soon and circle the center for a closer look at the orangutans. I truly feel this is unnecessary as there were a lot of great and less intrusive viewing points. If we were to go back, we would skip this option to respect the animals’ space.

Don’t leave without checking out the Flights of Fancy bird section. I am not a bird person and I loved it. There is an adorable section where you can feed budgies and they land on you while treating themselves to some bird seed. The kids lit up in this section and we stayed for at least half an hour. Its a magical space for kids and adults. Be warned. The Indianapolis Zoo has a very old fashion dolphin show involving a lot of lights, music and noises. If you aren’t into this sort of thing, skip this section of the zoo. 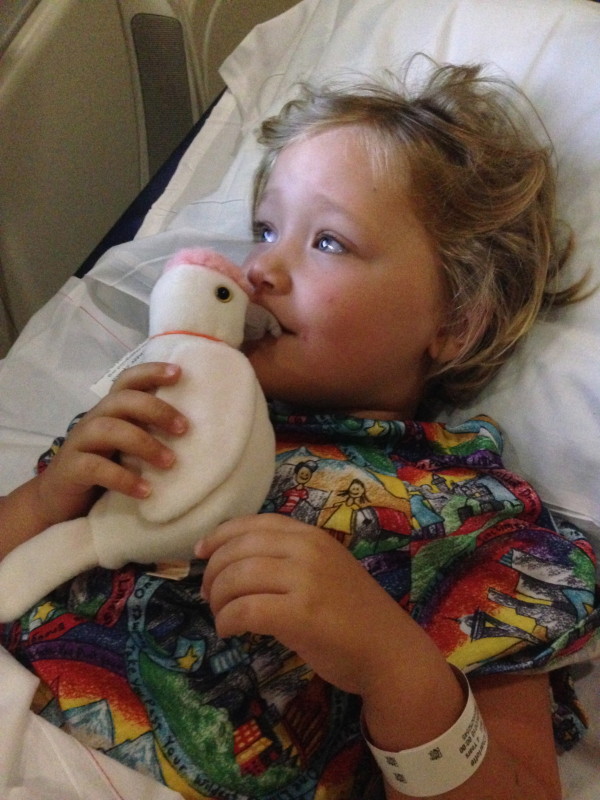 An unfortunate add-on to this post is where to go if your child happens to get sick in Indianapolis. Charlie woke up in a lot of pain and looked terrible. As she began getting sick, I decided not to risk it and rushed her to the Riley Hospital for Children. We were immediately seen by a loving group of doctors and nurses who took care of her every need. We left with a much happier and healthier 4 year old and I can reassure you that this hospital was top-notch in care and service. Its always comforting to know on vacation that there is somewhere to take your kids if needed and in Indianapolis you will find that place here. A huge thank you to the emergency room staff for taking care of Charlie as well as reassuring Will and myself that she would be fine. You made a bad situation a lot better from the moment we walked into your hospital and we will remember the care we received fondly. An additional thanks to the Hyatt Regency Indianapolis for being as concerned as I was and directing us to this facility in a hurry.