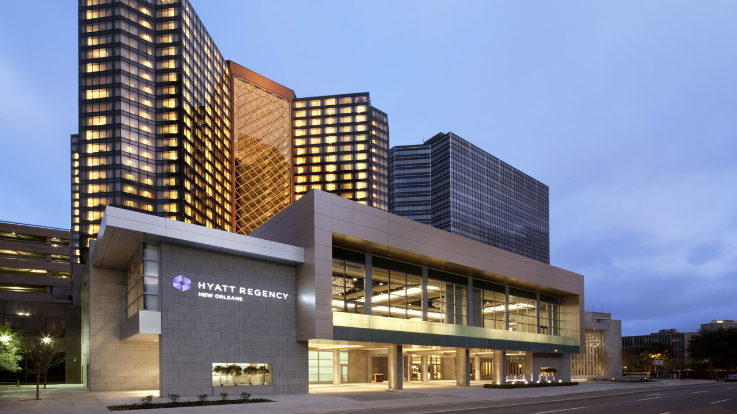 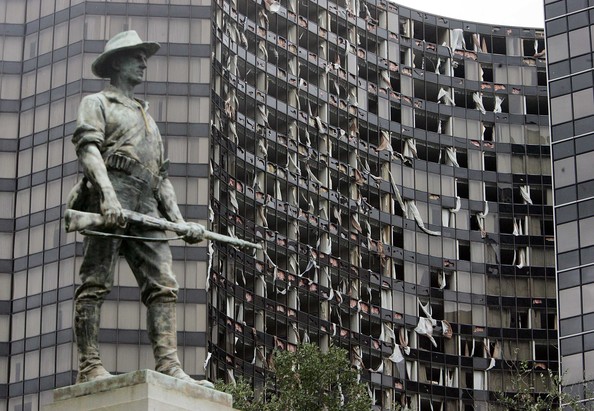 As I drove into New Orleans, Louisiana, one of the buildings I recognized most was the Superdome. Famous for the role it played in Hurricane Katrina, I was even more intrigued when I realized our hotel was directly across the street. We checked into the Hyatt Regency New Orleans and found a super clean and extremely modern hotel. Turns out Katrina played a big part in that.

The Hyatt was battered by Katrina but stayed open as long as possible to assist all those in the Superdome. Rescue workers and the mayor were housed in the Hyatt until damage became so extensive, the hotel had to shut down. The hotel closed for 6 years and reopened in 2011 after a $275 million renovation. 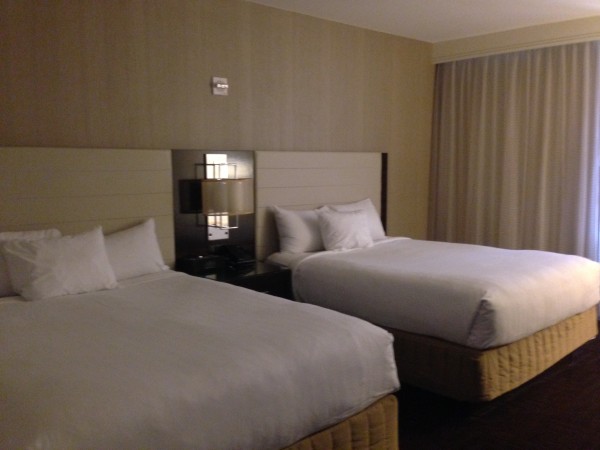 The Hyatt room was clean and modern like most other Hyatts we have stayed in. I particularly liked the interactive features that included ordering room service through the television. I was far too exhausted to talk to anyone on the phone. We had a view of the city and two comfortable beds. What more do you need?

Before this week I had never been to New Orleans. Turns out in summer it is hot. Fry an egg on the sidewalk hot. We were excited and ecstatic to be staying at a hotel with a pool. After a day of exploring, there was nothing better than coming home to the 5th floor of the hotel for a refreshing dip and a bite to eat. Both nights we stayed at the hotel, we had dinner reservations that we ended up cancelling. The food by the pool is quite good and once you experience the privacy and atmosphere at the pool you won’t want to leave. Tip: The Hyatt Regency does not offer day passes to the pool deck to people who are not guests of the hotel which means it is a lot quieter by the pool. This is something you will truly appreciate when traveling with kids. 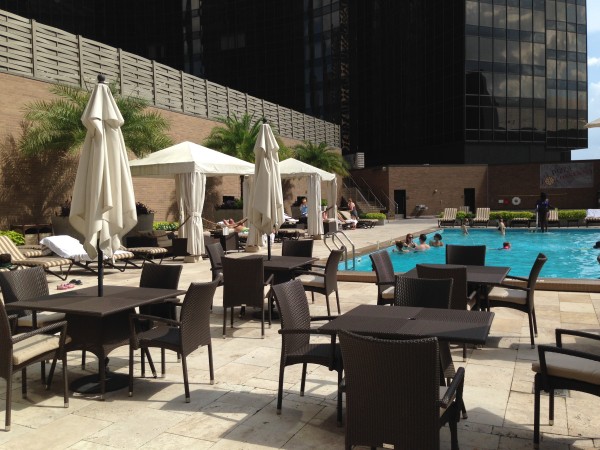 When I walked into the Hyatt Regency New Orleans, I immediately equated it to a Las Vegas hotel without the smoke. It is huge. This is something I wasn’t sure I would like but grew to appreciate. We spent two days in the French Quarter and it was frankly nice to escape it at night. I loved New Orleans but found some aspects of it stressful being alone with two kids. There are a lot of people drinking and there is a lot of noise. I felt that the hotel at first was very impersonal but grew to like its size. We were able to grab snacks at Starbucks as well as a few different shops that sold snacks and incredible croque monsieurs. We didn’t need to get out of our pjs to do so. The hotel also has a collection of gourmet restaurants including Borgne which serves authentic local seafood. 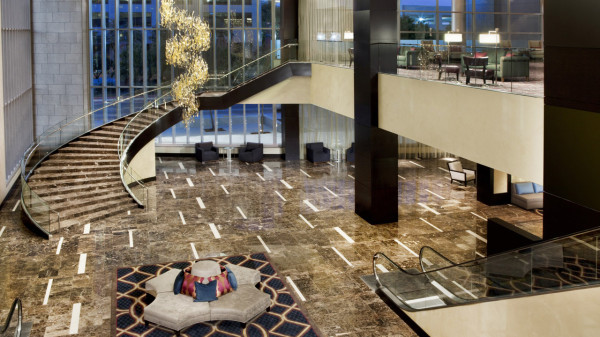 A good friend of mine is a Marine. He contacted me before I arrived in New Orleans and demanded my complete schedule. I, of course, didn’t have one. He tried to tell me that New Orleans is safe but “free spirits” like myself could run into trouble. I didn’t appreciate that fact until arriving in New Orleans and realizing he was probably right. As someone who travels alone with two young kids, safety is obviously a priority for me. This is why I loved the technology at the Hyatt. The elevators work by scanning your key and bringing you to the right floor. You have access to the shared areas like restaurants and pools but have no access to any room floor but your own. In a hotel this size, I found it comforting to know that you needed to be assigned a room on our floor to access it. I also loved not having to stop at every floor and having the quickest more direct ride to our room. 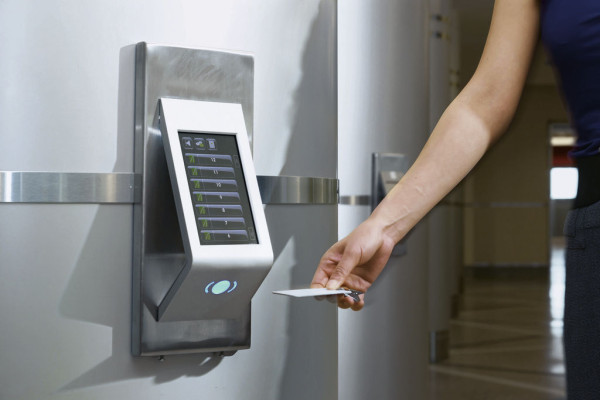 One of the things that really surprised me about the hotel was how quiet it was. The hotel has a huge atrium and our room was very close to the elevators. At night, we didn’t hear a thing. Also, being in a party city like New Orleans, I expected some drunk yelling around 2 am but heard nothing all night. We slept very soundly in a city that is not known for sleeping.

If you follow my blog regularly you know customer service is key for me. As must as we enjoyed the Hyatt Regency New Orleans, we found the customer service hit and miss. We loved the people working by the pool and in general found the food services staff amazing. The valet staff also put up with me forgetting chargers and needing to pull the car out more than once. That being said I did find some of the staff seemed annoyed to be dealing with someone with kids. In a hotel of this size, it is hard to feel at home but I think a better check-in experience and a few more smiles from some of the staff would have gone a long way.

Why You Should Stay? 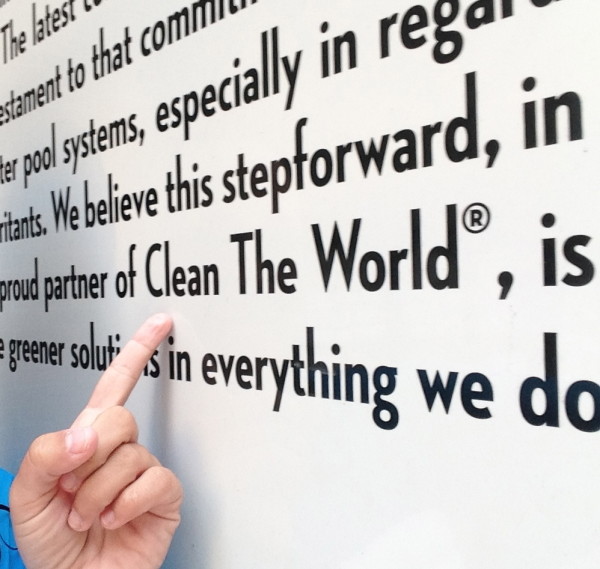 As someone that was glued to the television during Hurricane Katrina, I remember the images of the Superdome and Hyatt Regency. I truly cannot believe the changes the hotel was able to make. The General Manager of the hotel, MIchael Smith, has been onboard since before the storm and made it his own mission to reopen the Hyatt for the city of New Orleans. In doing so, the Hyatt team created a technological jewel for the downtown area bringing in tourists, sports fans and most importantly revenue.

The Hyatt is still doing good things for the community and is working with Clean The World to recycle soaps and shampoos to be given to the homeless in the area as well as distributed in Third World companies.

My conclusion:  Go for the history. Stay for the pool. 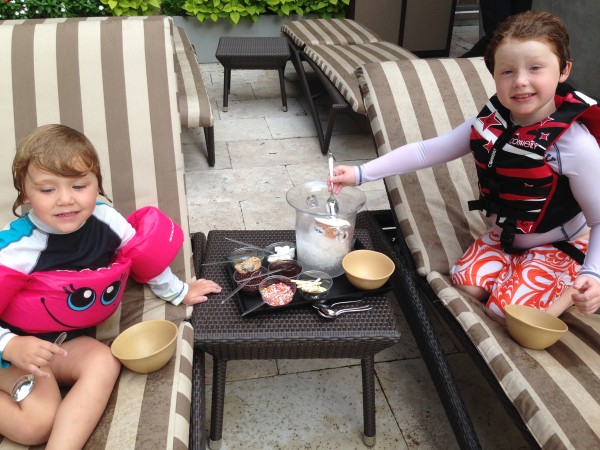