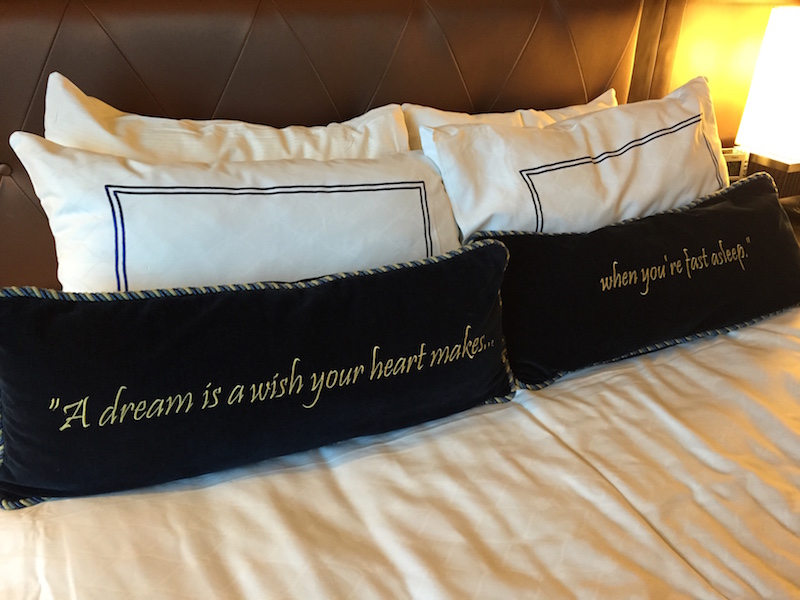 We see a lot of hotel rooms. I must admit that at times many of them blend together and begin to look the same. Even some of the previous hotels I have visited on Walt Disney World property have lacked a certain je ne sais quoi. That’s perhaps why I was so completely impressed by the Disneyland Hotel at Disneyland in Anaheim, California. There were certain little touches I didn’t foresee that I fell head over heals in love with.

Hidden and Not So Hidden Mickeys 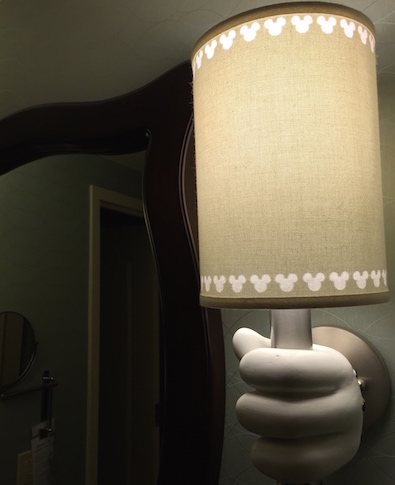 Like all of the Disney Resorts, the Disneyland Hotel is a great place to find Hidden Mickeys, small representations of Mickey purposely placed by the animators and design team but not meant to be seen at first sight. We first found Mickey in the wallpaper and the bathroom vanity. What I loved even more were the not so hidden Mickey touches that made the room feel extra Disney. Our bathroom vanity featured Mickey’s hands holding lights and our bathtub had very sleek Mickey faucets. The sink fixtures captured my eye with the large tap actually being the bottom of Mickey’s shoe.

The room did not only feature Hidden Mickeys but other hidden touches that made it just as magical. We went out immediately upon arriving and found we had a lot of surprises awaiting us upon our return to the room. It seemed like every light we switched on had features that were invisible during the day but made the room extra special at night like plain lights that lit up full of stars at night.

The Most Magical Headboard in the Whole Wide World

This Disneyland Hotel Review wouldn’t be complete without telling you about the headboard above the beds.

When we first entered the room, it was hard not to notice the giant wooden headboard that had the Sleeping Beauty Castle etched into it under some fireworks. Charlie and I simply melted. When we came back after dinner, Charlie was first to notice that the lamp by the bed had a Tinkerbell switch. Not one to ask questions, she quickly flipped the switch and the headboard went from Wow to WOWZERS. As the lamp began to sing the classic disney song “A Dream is a Wish Your Heart Makes” and the fireworks and stars etched in the headboard lit up in a beautiful display, it was hard not to let a single tear of happiness fall (I obviously cried my face off). 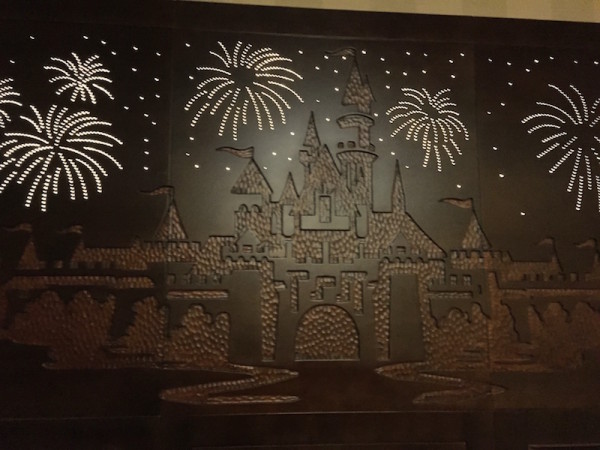 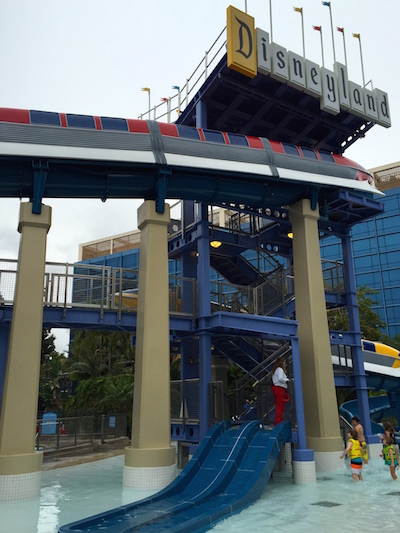 As I always say, the most important part of a hotel for us is the pool or in this case multiple pools, hot tubs and water slides. Disney didn’t miss a mark with the Disneyland Hotel pools and slides. The slides empty out into shallow pools and slightly deeper pools which are all equipped with lifeguards. The pools are large and all have a lot of room for multiple families to hang out and enjoy without being on top of each other. From above the hot tubs are Mickey and Minnie shaped, the second completed by Minnie’s signature red bow. We thoroughly enjoyed the pools and water slides and this area alone would persuade me to book the Disneyland Hotel again and again.

Let’s face it whether you or travel solo with kids like me or with two or more adults, it is really nice to have decent restaurants on-site. Even though Downtown Disney is steps from the hotel, we found that once we were back from the parks it made the most sense to stay within the Disneyland Hotel restaurants for dinner.

Our first meal one of the Disneyland Hotel restaurants was breakfast at Steakhouse 55. At night, the restaurant is a nice steakhouse. During the day its the perfect place to have a quick and delicious breakfast fresh to order. The kids had whole grain pancakes while I enjoyed an egg-white omelette plated with fresh California fruit. The service was quick and the cost relatively low with the kids getting a complete meal with side and juice or milk for $8. 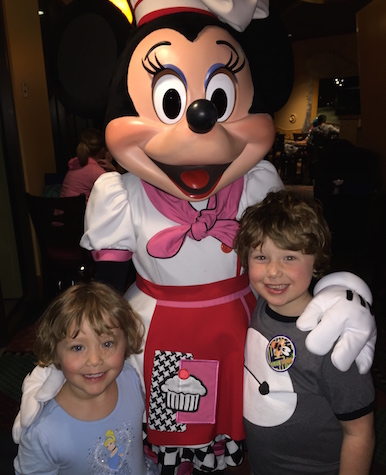 At night, we decided to head into Goofy’s Kitchen, the main star of Disneyland Hotel restaurants, and meet the man (or dog) himself as well as his friends Minnie, Donald and the ever so quirky Chip and Dale. I legitimately could hang with those chipmunks for a whole day or two.

Dinner was served buffet style complete with a good wine selection for adults. I must say, even though I try and stay far from buffets, I thoroughly enjoyed the food offered. Will stuck to kid classics like mac n’ cheese and pizza while Charlie and I ate our way through delicious salads, fresh carved meats and I dare say the best scalloped potatoes I have had in a while. We only sat down around 8:00 pm and the food was fresh and replenished at regular intervals.

Although you may not want to eat every meal at Goofy’s Kitchen especially when the character dining is happening, I would definitely recommend eating there at least once for the experience and the food. 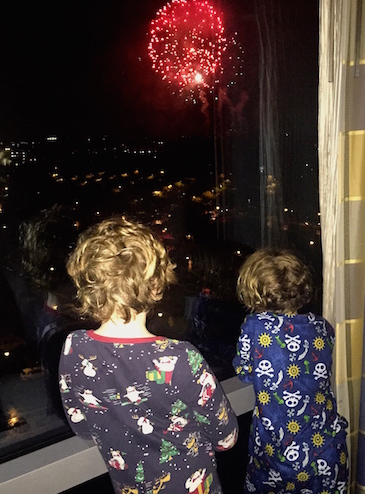 We were lucky enough to have a room that faced Downtown Disney which also meant we had a spectacular view of the Disneyland fireworks. For me, this made my life 100% easier as I didn’t have to worry about getting two kids back to the hotel alone in the dark from the parks. Instead, we were able to tune into the television in the room for the soundtrack and enjoy our own private fireworks show. This is an option I highly recommend for parents of younger Disney fans.

Since this is a Disneyland Hotel review, I will admit that if given the choice, I would choose it over the Grand Californian. The simplest reason is that it felt much more Disney to me which might be a good reason for some to choose the Grand Californian instead. I also preferred the size of the pool and the incredible water slides. No matter which you go with, I can assure you they are both great hotels.

My number one recommendation when staying at the Disneyland Hotel is to let your children find the magic for themselves. I noticed Hidden Mickey’s in the halls and the base of the lamps in the room long before they did but kept quiet. Seeing their faces light up when they first saw them was definitely worth the wait.

Watching Charlie, my princess obsessed daughter, fall asleep beneath Sleeping Beauty’s castle and the glowing fireworks was perhaps the most magical moment for me. I am sure you will find your own within the walls of the Disneyland Hotel. 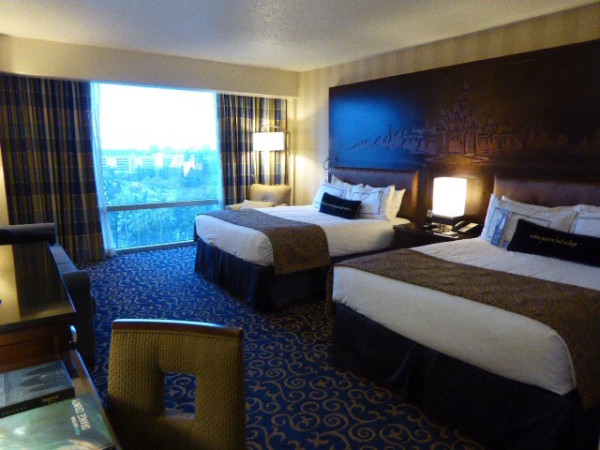 For more Disneyland reviews be sure to check out:

Why I Prefer Disneyland to Disney World; and

What I Believe is the Perfect Age for Any Disney Park.