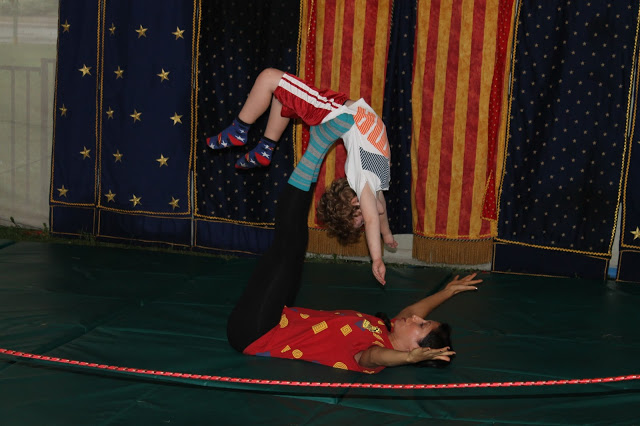 In my many mom-misadventures, I have often miscalculated the “best” day to do things by not checking the weather forecast and today’s visit to the CNE was no different. After promising the kids another day at the exhibition and knowing today was the last possible day we could go before leaving for California, I awoke to a massive rainstorm. Still the optimist in me said to go anyways. Unfortunately, the planning mom voice in my head never said to pack rain gear.
By the time we arrived at the CNE  it was pouring so I made a last minute decision to head up to Dufferin Mall quickly and grab some rain gear. On my way back from Dundas and Dufferin, I decided to drive past all the “local traffic only” signs that appear when heading south on Dufferin towards the exhibition and found a private parking lot that is $20 per day and a stone’s throw from the Dufferin gates. Perfect for today’s weather and if you are heading to the exhibition and only intending to see the kids’ activities.
My last CNE post provided most of the nitty-gritty information for this year’s exhibition and in this post I wanted to go more in-depth into some of the workshops you will find in Kids’ World Park. The workshops are all included in your daily admission to the exhibition and tomorrow (August 27, 2013) kids get in free until 3 p.m. As I previously reviewed the Pizza Nova pizza making workshop, it will not be included here.
Under the Little Top Circus Workshop
The circus workshop was by far Will and Charlie’s favourite exhibition activity.  The workshop runs 7 times a day and all times are posted here. We arrived for the 10:30 am workshop and due to the weather, we were the only participants. To say the least, the kids got more than individual attention. The workshop is run by actual circus performers who have no affiliation with local circus schools. This is great as there is no pressure to buy anything or register for a class somewhere and you can tell these people just really want to share their love of the circus with children.
Charlie was immediately drawn to the aerialist who within seconds had the kids on a mat doing incredible tricks. To be honest, my kids would have stayed with this woman the entire day if I had let them. She was kind and funny and had a wonderful way of connecting with kids.
After visiting the aerialist, the kids were taught how to properly walk on a tightrope by two other instructors. They both at this point would gladly have run away from home and joined the circus. The people working this workshop are funny and know how to technically teach children to do these things.
Next the kids were taught balance and persistence as they got to try to balance spinning disks on sticks.
After the above activities, we went into the pre-school zone which is led by a very kind yoga teacher. This zone has its own tightrope, a tumbling mat, a balance beam and a dress-up box. It also have baby toys so parents have somewhere to sit with younger children during the workshop where the babies can stretch out on a mat and play.
The yoga teacher immediately had the kids laughing hysterically and was incredibly engaging. She taught them to do somersaults down a ramp and jump through hoops and then played dress-up with them. When Charlie chose to be a witch, she got into the role playing and begged Charlie not to make her a frog. Within minutes, she was hopping around like a frog and the kids were loving it.
I cannot recommend this workshop enough. Having passed by it on our first day and seeing the kids inside laughing and playing, I knew it would be worth it to return and I was not disappointed. Now I only need to stop worrying about the kids running away to join the circus.
Art Studio
The Art Studio was our next stop after circus school and if I am being honest, it wasn’t very much fun. The studio has five stations including beading, play-doh, something called fibre arts which no one explained to us, sculptures and painting. The kids were immediately asked if they wanted to make necklaces and were given pipe cleaners and big beads. Strangely, they were also given tiny beads that didn’t fit on anything and both were quite confused. Although they had fun doing this, it was something we could have done at home. The people working in this workshop barely interacted with the kids and, after making the necklaces, the kids were bored and wanted to leave. The other stations looked interesting but even when I was asking questions about them no one seemed interested in showing us how to do them. If you are running low on time, this is the workshop to skip.
Make Music Workshop
After the art studio, we headed next door to the Make Music workshop and we were back to having a lot of fun. The kids immediately were greeted by the people at the workshop and given a lot of options for making music. The workshop has a lot of instruments and microphones as well as a station of iPads with a ton of music apps. This was another workshop we could have spent a lot of time in and from what I could tell, we would have been welcome to stay as long as we wished. The staff here are fun and will play any song your child requests if they have it. Will and Charlie really enjoyed making music with the other children and while each child sang, the others all were playing drums on the floor in front of them. I would strongly recommend visiting this workshop with kids of all ages.

Our final workshop of the day was the magic workshop which is split into two sections: a magic show and an illusion display. The kids were not interested in the illusion display but I quite enjoyed it.

Make sure to stay for the magic show as it is quite entertaining. Professor Wick and his assistants were good at giving the kids a lot of opportunities to volunteer and picking a lot of different kids out of the audience. Will and Charlie were chosen for a magic trick and they both are still wondering how Charlie as the wizard made the trick happen. Charlie quite simply was in awe of the fact that she somehow performed a magic trick with no magic know-how whatsoever.

The only downfall to the magic workshop is that Professor Wick is selling magic supplies during the show such as wands and props. It isn’t by any means a sales presentation but I did wish he had mentioned it less during the show and perhaps just at the end. Otherwise this workshop is a lot of fun and filled with laughs and some amazing tricks.

After the workshops, we avoided the rides and wandered around the park a little. The weather was terrible and a storm was headed our way so we made a quick visit to the Reptilia Cruiser and then headed to the face painting tent. The Reptilia staff members are really great to talk to and have a lot of neat information to share. They also bring out different reptiles for your kids to meet. It is clear that the snakes are quite used to meeting children and the Reptilia staff treat the reptiles with a lot of respect. Snake lovers or not, I would recommend visiting the trailer which is located in Kids’ World Park.

By the time we had met the snakes and had lunch, the sky was looking very ominous again and we decided it was probably time to head to the car. On the way out we noticed the face painting tent had no line and decided to stop at get a caricature done of the kids. Will and Charlie loved chatting with the artist and we ended up with an incredible free souvenir of our time at the exhibition. Definitely check this tent out which is located in the centre of Kids’ world.

As the artist wrapped up our drawing in cellophane, we heard the familiar rumble of thunder and decided it was time to call it a day. The Canadian National Exhibition runs at Exhibition Place in Toronto until September 2, 2013.

**Solo Mom Takes Flight received free day passes from the Canadian National Exhibition. This in no way influenced the opinions expressed in this blog.