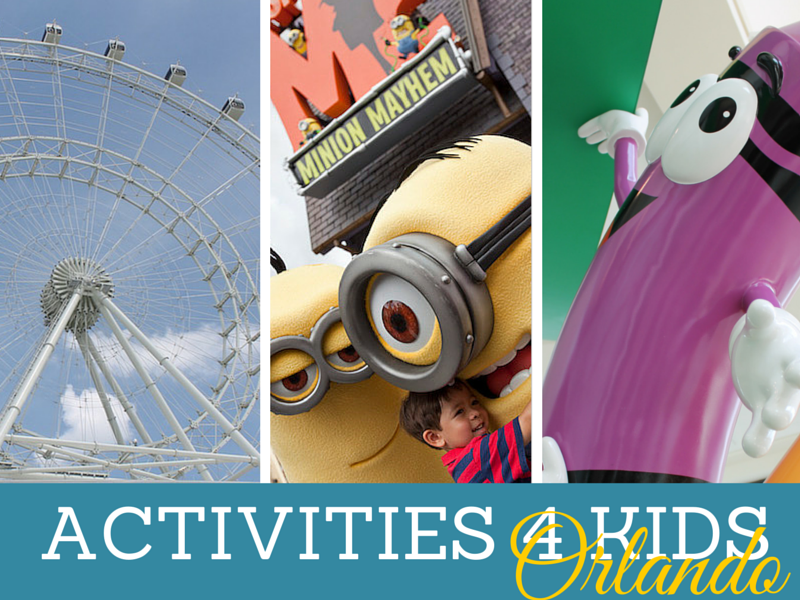 When asked about activities for kids in Orlando, the obvious response is Disney’s Magic Kingdom. The reality is that Disney is not the only game in town anymore and there are plenty of really cool activities for kids in Orlando. Here’s what you need to know about 3 great attractions: Universal Studios, I-Drive 360 and the Crayola Experience Orlando.

I must admit in the past I have been a naysayer about taking kids to Universal Studios in Orlando. I had my reasons. First, I love big rides and roller coasters. Second, I am a Harry Potter fanatic. Add those together and Universal Studios seemed like the perfect place to visit WITHOUT my kids who until recently both fell under the 48 inches tall mark. 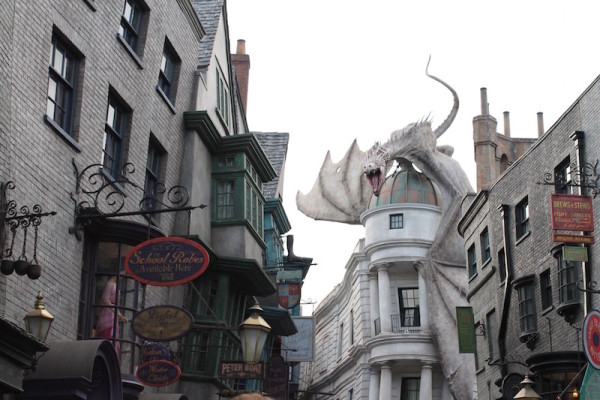 Turns out I was wrong. I recently spent 2 days visiting and couldn’t believe the amount of awesome activities for kids at Universal Studios. As I wandered around both Universal Studios and Universal’s Islands of Adventure I counted at least 7 playgrounds some with really fun fountains and water features. Team that with the very popular child swap system and your entire family can actually have a vacation. Lots of parents were spending time with smaller children in the parks while older kids or parents lined up for the popular rides. Once the first parent had ridden, it was a quick swap at the park with the younger kids still having a blast playing. 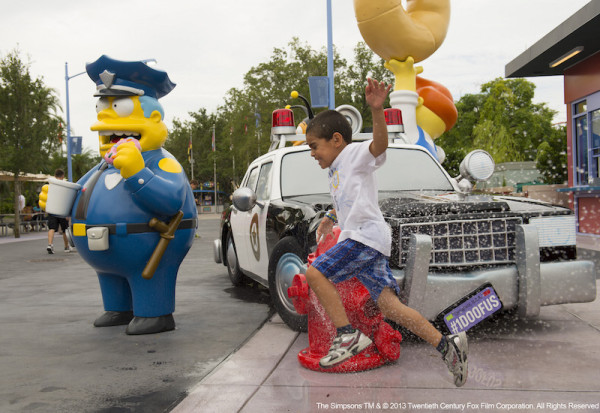 Another noticeable feature is that even the most popular rides have a lower height requirement than most parks. As the mother of two Transformer loving kids, I was excited to see that at 40 inches tall, younger kids could enjoy the awesome TRANSFORMERS: The Ride-3D  with their parents.  At Universal Studios, I noticed that, besides the Hollywood Rip Ride Rocket and Revenge of the Mummy,  young kids could ride pretty much any ride. Check out the rider heights on 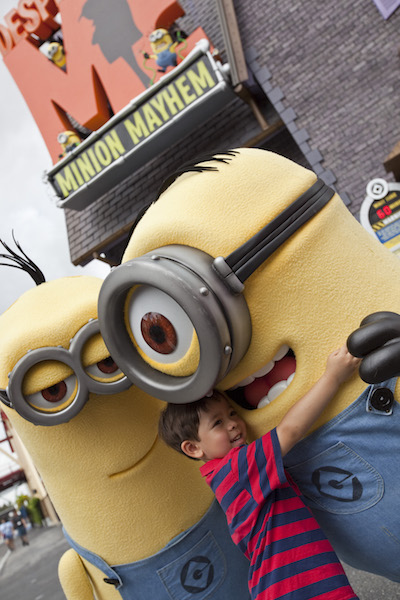 these popular rides that most kids can ride with a supervising companion:

What I loved about Universal Studios was that the rides were much more up to speed with my kids than some of the other parks. There is also less of a division between girl and boy rides as both my kids love Minions, E.T, and Transformers equally. Check out all the family and kids rides here.

Universal also knocks it out of the park with the following kid-friendly features: 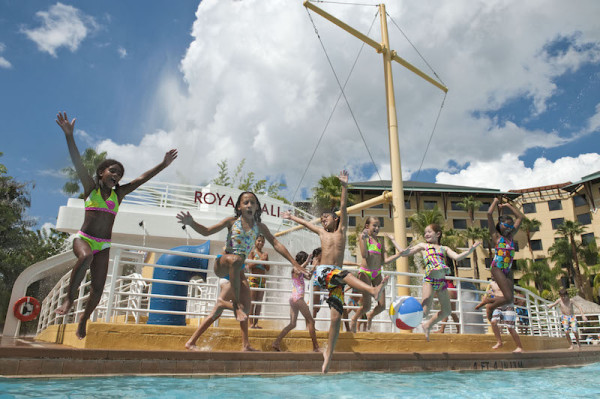 The Wizarding World of Harry Potter with Kids 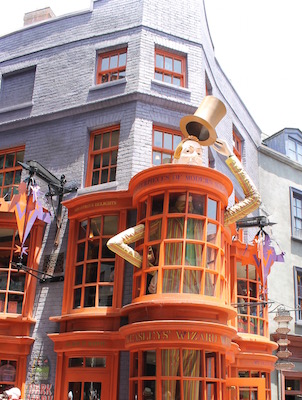 My absolute favorite part of Universal Orlando is The Wizarding World of Harry Potter. I, from the day Universal Studios announced the opening of the Harry Potter themed sections, dreamed of visiting when my kids were of Harry Potter age (9 to 11). In my mind, they would read the books and upon finishing the final page of the final book, we immediately would run to the airport and get on a plane to Orlando. Turns out I now think they could visit much sooner and have an incredible time.

The Wizarding World of Harry Potter is a perfect way to introduce your kids to the series. Whether you’ve read the books or not, its hard not to fall for Diagon Alley and Hogsmeade. I watched kids of all ages wander through Diagon Alley with wide-eyes and open mouths. My favourite nod to the books was the story time which featured stories from The Tales of Beedle the Bard, a children’s book featured in the Harry Potter series. Kids of all ages watched the puppet show and live story time completely enthralled in the magic of J.K. Rowling. Add that to Florean Fortescue’s Ice-Cream Parlour, Weasleys’ Wizard Wheezes (joke, toy and candy shop), and the Magical Menagerie pet store and your kids will be sold. 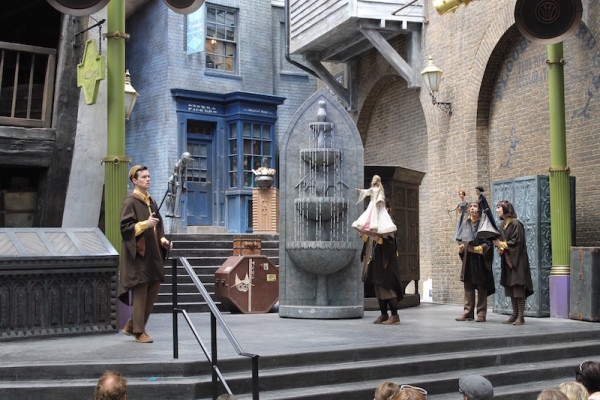 If headed to Universal Orlando Resort check out these amazing deals for Canadian Residents and members of the U.S. Military.

Activities for Kids at I-Drive 360

Get anywhere close to I-Drive 360 and you’ll be mesmerized by the Orlando Eye, a 400-foot tall observation wheel. Once you get onsite, you’ll see I-Drive 360 is a great place for fun activities for kids in Orlando. Starting with the Orlando Eye, this activity lasts over 30 minutes with a very cute pre-flight 4D movie and then a 20 minute ride on the Orlando Eye. I actually shuttered when I first heard it would take 20 minutes as I have an irrational fear of Ferris Wheels but it was truly an enjoyable experience. From the Eye’s highest point kids will love seeing the iconic Epcot Spaceship Earth (the golf ball thing) as well as every other place in Orlando. The cars are air-conditioned and equipped with interactive iPads for exploring the skyline. After riding the eye, there is a family-friendly food court, a very cool Skeletons museum, the Sea Life Aquarium and Madame Tussauds to explore. Also opening in Summer 2015 is Arcade City. On-site there are restaurants, ice cream shops, shopping, and plenty of room to roam in a mostly car-free environment. 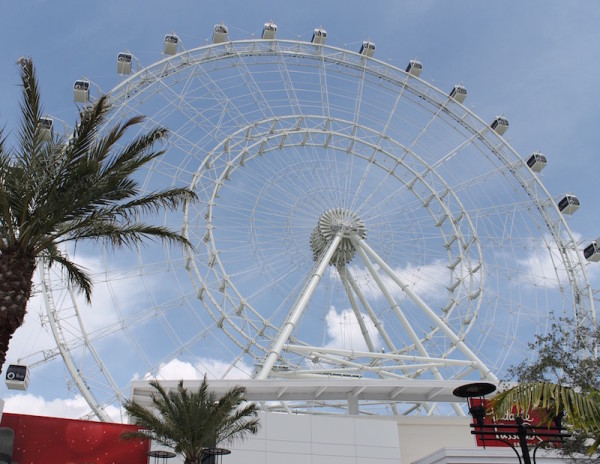 One of the newest and most unique places for  fun activities for kids in Orlando is the Crayola Experience. Set to open July 1, 2015, this attraction is part store, part play centre/museum and all kid. This is a place you can literally do anything with a Crayola crayon and kids will be in heaven. There are lots of stations where kids get crafty, create digital drawings that appear on the walls of the Crayola Experience and do awesome things with melted crayons like drip art and making new crayons in funky molds.  I literally could go on and on with the amount of great stuff your kids can create and do here but trust me, they and you will love the Crayola Experience. Don’t leave without making your own crayon with custom label or checking out the crayon wall where kids can pack 99 colours into a box to take home. 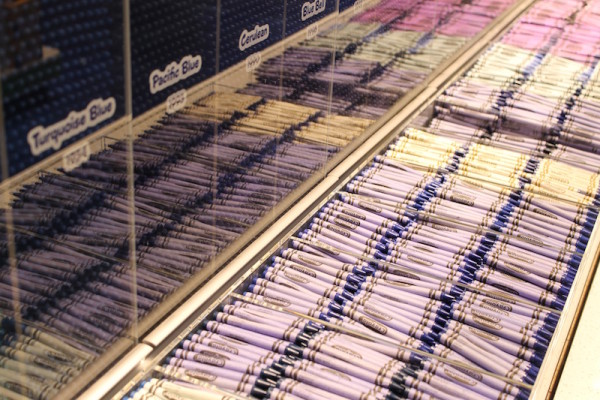 Activities for Kids in Orlando

This post just scratches the surface of these three great activities for kids in Orlando but I hope it inspires you to look at Orlando beyond the mouse and check out Universal Studios, the I-Drive 360 and the Crayola Experience. Trust me, your kids are going to love these places and you’ll have a great vacation too.